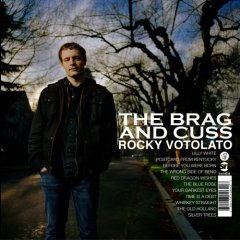 The Brag and Cuss

Rocky Vololato, the gentleman whose last release Makers made the general populace swoon, has returned with The Brag and Cuss, a very distinct change of pace from the stripped down, whispering ballads of his previous album. Votolato is one of those rare few – a singer/songwriter who refuses to get pigeonholed into a genre.

With The Brag and Cuss, Votolato delves into alt-country. While echoes of Makers still make themselves apparent on the disc, such as on the slow-dancing acoustic ballads "Whiskey Straight" and "The Old Holland," Votolato shows that he is just as strong when he’s forced to compete with a very talented backing band.

On "Postcard from Kentucky," Votolato drenches his trademark croon in Bluegrass whiskey and mandolins, and in turn, creates a very authentic sound. It’s become easy for many musicians today to release an "alt-country" album. Most think that all you have to do is throw a slide guitar or a banjo into the pot of electricity, and zap, you have an Americana stew. However, when the genre is approached in this manner, the true feeling is lost. Americana music isn’t something that you can coldly manufacture; it’s something that you have to believe in. The Brag and Cuss is very strong proof that Votolato, a Texas native, believes in the music he is creating. "Lilly White" and "Red Dragon" are true songs that speak to all of us rural expatriates living in the city, trying to cope with the dichotomy of where we’ve been and where we are now. Votolato has the ability to sum up all of these emotions into short, catchy songs that already sound timeless.