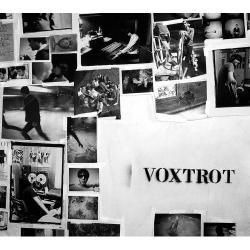 The hype machine is strong within you, young Voxtrot. I feel like I’ve been hearing about, getting random EPs and single, reading about and generally waiting for a proper full-length from Austin’s Voxtrot since the early 18th century, and after all that time, it has finally arrived.

Can any album live up to that sort of buildup? Probably not, but at least Voxtrot doesn’t really disappoint; instead you pretty much get what you bargained for: Brit-influence pop rock that doesn’t pull any big musical punches but leaves you with a sense of musical well-being – that at least somebody out there makes really well-polished pop music in this day and age. There is nothing that particularly stands out on Voxtrot, which isn’t necessarily a bad thing, but it's one of those albums that just doesn’t stick with you.

I’ve had a while to absorb the disc and I’ve never felt the strong compulsion to hear it, but if I’m looking for something agreeable to play while I’m working, Voxtrot seems to fit the bill. Does that make Voxtrot modern rock elevator music? Well, not as such, but you wish that the band would bare their teeth a little more than they do. Even their musical “Introduction” (that being the name of the first song on the album – not the most creative way to do it) just doesn’t hook you (and oddly seems to steal a riff from Blink 182’s “What’s My Age Again?”) with its overly mellow opening. However, “Kid Gloves” is a little looser, with rolling drums and a catchy chorus, like a later-day Push Kings or Ted Leo-lite. This Push Kings feel is especially evident on “Steven,” but I guess any band trying that Beatles-influenced pop-rock will give you a pretty similar sound – and really, maybe that is part of the disappointment of the album: the lack of real chances taken.

You have to look for songs like “Firecracker” to get a song that has a fury to keep you involved, with a more aggressive bassline and melody, something new from the boys. You get the same impression out of “Brother in Conflict,” a song that starts out fast and stays that way as it jumps into the punchy chorus with Ramesh Srivastava singing, "I thought you’d always be my brother in conflict." It feels like a freshened up R.E.M. and ends up being one of the real high points of Voxtrot. “Ghost,” a song that sounds like a mellowed-out Bloc Party, has Ramesh playing an American Kele and replaces the synths with piano, but the song structure is very similar with a driving beat and increasing sonic intensity throughout the song.

The thing is, there's nothing I can really point out that’s bad about Voxtrot, but there’s nothing I can really point out as a truly magical musical moment. Songs like “Future Pt. 1,” “Real Life Version,” or “Easy” are nice, listenable, and really well put together, but have about as much life in them as a Hollywood trophy wife. It's only in brief moments like “Every Day” that you can feel that Voxtrot might be onto sometime fun, with swirling strings and a funky little beat that drives the song along, but even that just sticks on you like a meal of carrot sticks. The album closes on “Blood Red Shoes” and at least it leaves you with a good impression of the band and its ability to produce really finely engineered pop music – you know if it ever got a chance, it could be a big hit … albeit in 1985.

The main failing of Voxtrot might be the formulaic feel to many of the songs. They all sort of blend into each other, at least in your memory, and probably more ominously, none of them really stick out in your mind. This just makes Voxtrot a difficult album to assess because you know that the band is good, at least musically, but like a student that scores well yet you know he could be so much more, Voxtrot comes out of the gate not on a full sprint, but trotting on its own hype-driven laurels.