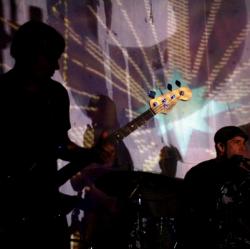 Voyager One, Head Like a Kite, the Heavenly States, Blue Light Curtain

Voyager One, stalwarts of the Seattle scene, named because they were launched around the same time as the actual Voyager One in September of 1977 (or does it just seem that way…), headline this bill and share it with locals Head Like a Kite and Blue Light Curtain, sandwiching Bay Area band The Heavenly States.

Not a clunker in the bunch.

First up is Blue Light Curtain, who live remind me variously of Slowdive, 4AD records, Lee Hazelwood, Explosions in the Sky, and Brian Eno. Laura Bratton, the primary vocalist, sings in a style that would be readily familiar to fans of the aformentioned 4AD Records and dreampop music; ethereal and somewhat detached, but in spite of that aloof sound, she manages to really engage the crowd. There’s a warmth there often lacking in the genre that’s very comforting and more than a little sexy.

Guitarist Paul Groth adds his voice to the mix on occasion creating boy/girl vocal-thing for which that I’ve always been a sucker; Paul and Laura have very complimentary tone and timbre, allowing them to take full advantage of the gender contrast, creating a rich vocal mix. Paul plays a baritone guitar which adds depth to their bass-less lineup, and he chats loosely with the crowd throughout the set, in contrast to the moody music they play.

One of the more intriguing facets of Blue Light Curtain’s line-up and overall sound is that each song is anchored by a drum machine, an unchanging pattern underpinning each song. This, in theory, might detract from the dynamics, except that they also have a live drummer, Sky Lynn, who builds on to, and plays off of, the basic rhythm track. On a song like “Sleeping” her building intensity defines the ebb and flow, especially in live performance, and allows for a more visceral experience than one might expect. Sky takes the gorgeous sounds of the songs and gives them life and soul.

Their set closes on “Oh, Sailor,” a track from their self-titled EP, which toes a dark line, calling to mind for me Pornography. By the Cure. Not that there’s anything wrong with the other kind of pornography. Or so I hear. I only read the articles.

The Heavenly States is the only band on the bill with which I have no personal familiarity, only awareness through the interwebs and positive blog spin I’ve seen in recent months/years. Tonight they’re touring their second full length record, Black Comet, and selling their sound with an energy and enthusiasm that occasionally recalls a tent revival (especially on third song “Lost in the Light”).

Right from the get go with “Monster” they reminded me of classic American indie-pop acts like Superchunk and Pavement, with twice the energy and three times the conviction. Almost immediately, though, surprises appear as Lita Ford’s “Kiss Me Deadly,” unrecognizable, swathed in violin and keyboards, save the (embarrassingly) familiar lyrics. No sign of irony anywhere. Thank the frakking gods. The quickest way to win my heart at a rock show is with a random cheese-tastic cover. Mission accomplished, then, THS. Well played.

On the aforementioned “Lost in the Light” a tight, trebly, tambourine-laden intro explodes with energy, only to pull back and explode again to a driving conclusion. By this time I’m getting tired just watching. Later they shift to updated cowpunk as “Roses” recalls the Old 97’s classic rave-ups, and then, as they race on through their compact and focused set, the sparkling lead guitar line of “Never Be Alright” and the earworm keyboard hook of “Pretty Life” stand out and serve to remind me of their mastery of the “pop” in this indie-pop. Big surprises and expectations exceeded.

Dave Einmo, the founder member of Head Like a Kite, has been a fixture on the Seattle scene for a number of years, playing in bands like Sushirobo and Spyglass, as well as being one of the masterminds behind Pattern 25 Records (home of Jon Auer and original home of Smoosh, among others). Head Like a Kite is his big step to center stage. While he put the record together essentially as a solo artist with help from many friends, he is now joined by Trent Moorman, another familiar face, his having played with Graig Markel, Argo, Robert Roth and many others (he also writes for the Stranger). I caught Head Like a Kite in January when I was already three sheets to the wind and really dug the feeling, but was in no condition to make any critical assessments. Tonight I get a second chance at proper judgement.

Head Like a Kite get lumped into the “electronic” category, though at the same time reviews of the album have namechecked everything from DJ Shadow to Dinosaur Jr., and I can’t disagree with any of it. The project grew out of some home movies Dave found then sampled and, with the help of members from bands like Kinski, The Posies, Crooked Fingers, and Preston School of Industry, turned into the songs of the Kite’s debut Random Portraits of Home Movie. It sounds like a gimmicky premise, but with his ear for melody and his stellar abilities in sound manipulation, Dave generated a musically compelling first album.

Taking a project like this live can be a challenge. The electronics that sound so rich on the album can translate to a less than engaging live show. Enter Trent on drums. Dave and Trent play live to backing tracks, the live guitar and drums giving the songs real heart and soul on stage and a remarkably expansive sound for two guys and a pile of electronics.

Head Like a Kite, by virtue of their cinematic roots, are more than just music. The whole project is born of home movies and those same movies are a vital part of the live show. I’ve always been in favor of visual elements incorporated into rock and roll shows; it’s a bit of a coincidence that on this night the Kite shares the stage with Voyager One, as V1 has for years had one of the more interesting visual presentations, courtesy of their visual collaborator Projectorhead. The Voyager One guys use the visual as an audio enhancement.

Head Like a Kite is a bit different. The songs are actually made of parts of the film sounds, and are inspired by the images. The songs stand on their own on the album, but in the live setting the images become inseparable from the music. As I was watching the show unfold, it struck me that the visuals neither enhance nor detract from the performance, which sounds like a knock, but it isn’t.

It was only later when I was talking to Pete Greenberg, the Crocodile booker, that he pointed out the plain truth: the films are the third member of the band, every bit as important to the live show as Dave or Trent. It’s like a tightly intertwined package deal, and all the richer for it. Head Like a Kite seems on a paper to be ideally suited as a bedroom-studio/self-release/gimmicky-side-project type-thing, but in execution is a deep multimedia experience and one of the best three-piece bands
I’ve ever seen. The recordings are great, but live Head Like a Kite really soar.

Voyager One close the night with a more straightforward set than I expected. Since their launch in 1998, they’ve disappeared and reappeared several times growing and changing in the process. Named for a famous/tremendous Verve bootleg, Voyager One followed closely in Verve’s sonic footsteps in their initial material.

Their most recent release, Dissolver, while continuing the spacey approach of their previous work, found a little snarl and rock attitude in songs like album opener “Salvation.” It’s that version of Voyager One that takes the stage tonight. This Voyager One is more aggressive, singer Peter Marchese more confident and vital in his role up front than ever before.

They sound tight; though the rhythm section feels a little, “pro-gear, pro-looks, pro-attitude” for the band’s shoegazer roots, they do serve the goddess rock well tonight. Voyager One has always been the kind of band that encourages me to stop thinking and just soak in the sounds, partly because of the all-engulfing guitars, partly because of the nouveau-psyche imagery projected behind them, and that’s what I do tonight.

Now tired and sated of thirst for the rock, I will find several more drinks, then the couch, or maybe the floor. See you at the next show.