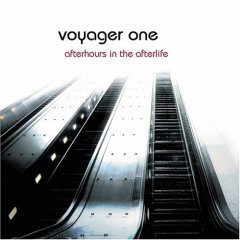 Afterhours in the Afterlife

Voyager One’s fourth studio album Afterhours in the Afterlife gives fans several sides of this veteran Seattle band's talent by taking their sound up a notch. It could have previously been said that they were just another shoegazer band, but that just isn’t the case anymore as this new release shows pure musicianship. They've crafted songs for driving fast as well as songs for late night back rooms. They indeed have matured since their days of inspiring people to start record labels, i.e.: Loveless Records. As music itself has significantly changed since that time, Voyager One has as well by creating a more lush sound that still leaves the listener with feelings of ennui.

First track “Here” arrives as kind of down-tempo electronica but has beautiful effects on the guitar that ebb and flow throughout while adding to the bass line and beat with syncopation. It’s certainly one of my favorites on the album. I can envision the blur of trees or the rush of city buildings with my eyes wide open during this track. The next highlight comes with “Beautiful Wreckage,” which is like a tantric mini-voyage that evolves with a Gish-esque bass line into a psychedelic chillout. While it doesn’t have those ‘single’ qualities I find the track engaging and quite moving. The slow transition is a perfect example of Voyager One at their best using waves of sound to create a soundscape with many levels.

“Bed of Sound” also stood out to me as I distinctly remembered this song from their CD release party. Remembering a single song from a show that was a month ago is pretty impressive. The vocal melody and verse are striking in the way they interplay with the music and there’s always a feeling of the song going somewhere really important. Although we never really get there it’s a terribly fun trip for four minutes. “Sine Wave” closes out the record beautifully in its straightforward nature but also in its complexity. It personifies the record and the band with the contrasts on drums and piano and a well mixed hum from the guitars that never overpowers the other aspects of the band.

While other songs like “The Future is Obsolete,” “I Remember Everything” and “Ocean Grey” have good moments, they never quite reach a zenith, which is what I think Voyager One are going for in their music. My only problem with the records is that there seems to be as many incomplete ideas as there are fully realized songs. With music that typically contains droning guitar and repetitive bass lines, some progression in the songwriting is welcome and indeed Voyager One achieves this more often than not on Afterhours in the Afterlife, which is what makes them stand out in an era of generally apathetic songwriting.