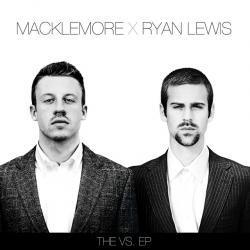 The VS. EP is two things. It’s a spectacular collaboration with producer Ryan Lewis and also Macklemore’s comeback album after four years of nothing. For all of you currently on hiatus from something, take note: THIS is how you do a comeback.

The EP opens with “Vipassana” which is essentially Macklemore reaffirming himself in the scheme of things. From the way he speaks, he sounds refreshed and the track is very refreshing to listen to. It sounds like you just got up, took a hot shower, got dressed up real nice and then stepped outside to greet the day, and the day greeted you back with a cool breeze. On “Vipassana,” Mack talks about where he’s been in the last four years and what brought him back. He talks about how he was inches away from death, but sobered up and how after years and years of searching, he’s found himself and what really matters in life. I’d like to think that you don’t have to nearly die to find what really matters in life, but still, it’s good to hear that he’s found himself.

What follows “Vipassana” is the romp stomping 80’s send up of “Crew Cuts” in which Mack and another unnamed Emcee wax lyrical about their best memories of life “before CD’s and Internet was in effect.” The song is a full on party and the most levity this EP has in store. It reminds us that, besides great storytelling, Macklemore is capable of having great fun with his music. A tip of the hat is in store for Ryan Lewis, whose production job gets better and better as the EP continues. And of the seven songs, there isn’t a weak one; they’re all choice cuts.

All the songs on The VS. EP heavily sample other artists, but it is with the third track “Life Is Cinema” that one of the more recognizable samples comes into play. Ryan Lewis’s choice of back beat on that song was created from The Killers’ “All These Things I’ve Done,” even going so far as to sample the famous refrain “I’ve got soul, but I’m not a soldier” which proves that you can make a really good piece of music out of a mediocre one, if you put your mind to it. Mack’s rap on “Life Is Cinema” gets more and more intense as the music builds around him. He raps about looking at life as though it were a movie and realizing that when things suck, the only person who can be the editor is you. Powerful message.

The EP’s trend of heavy sampling continues with the fourth song, the harrowing “Otherside” which samples and builds around the bass line from the Red Hot Chili Peppers song of the same name. Appropriate, because “Otherside” is Mack’s story of his addiction to cough syrup and pain meds that nearly ended his life. The song displays Macklemore at his most sober. Clearly this is heavy stuff and he doesn’t mess around with it, he just tells his story and warns against the dangers of thinking oneself invincible when, really, you’re not. Laden with mournful strings and a heavy beat, “Otherside” is by far the scariest song Macklemore has ever penned. But it’s not the most epic. That honor belongs the track five: “Kings,” which samples the Arcade Fire song “My Body Is A Cage.” The heavy church organ sounds are the perfect backing for Macklemore and Champagne Champagne to rap over. Like Mack says on the track: “You only get a couple chances to be epic” and “epic” is about the only word I come up with in describing “Kings.”

As I said before, this EP just gets better and better as it goes on and the penultimate track is one of the finest in all of Mack’s Discography. “Irish Celebration” features Mack rapping over “Scenic World” by Beirut and a whole bar full of rowdy drinking buddies. The song is obviously one of festivity and listening to the way Macklemore talks about his Irish heritage makes me actually wish I had some Irish blood in me. It’s the chorus that really gets you, though, “We put our glass to the sky and lift up, and live tonight cause you can’t take it with ya, so raise a pint for the people that ain’t with us, and live tonight cause you can’ take it with ya.” It’s not a Flogging Molly or Dropkick Murphys song, about getting shitfaced at every turn; it’s a Pogues song about Irish pride in Hip-Hop form, with Macklemore as a better-toothed Shane MacGowan.

After “Irish Celebration,” comes the final song on the EP, “The End.” A slow, piano drive song built on samples from “Another World” by Antony & The Johnsons, “The End” is Macklemore’s story about his relationship to music told through the metaphor of a sweet last school dance. It’s a beautiful end to a fantastic EP.