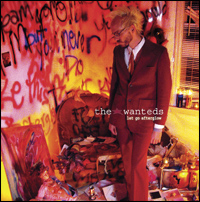 The Wanteds is not a band but rather the one-man project of Tommy Harrington, who wrote, played, and produced "Let Go Afterglow, his debut project. At times, the one-man-band concept detracts from the process, which could benefit from creative input from others who aren't so close to the music.

Harrington, who was in Souldriver (out of Los Angeles), Full Blown Red and, most recently, Portland's No. 3. Breakdown, has a knack for writing hooky pop tunes. He also has an incessant love for loops, both in music and lyrics — a vice that results in sometimes catchy, other times monotonous tunes. His sound is parts Modest Mouse, part Granddaddy, part folk-rocker on the porch with a guitar.

What is difficult to get past when listening to Let Go Afterglow is that it's a full-fledged effort, not just a demo. The album waffles between stellar, fully realized songs and those that sound like something recorded after just penning. Tracks like "Confess," "Gravity" and "Afterglow" are so much better than the rest of the material on Let Go Afterglow that they overpower the rest of the disc. The grating "Can't Say No" and "Forever" are more irritable than entertaining. But pretty piano ditties like "Maybe I Won't" and Harrington's sweet and quirky cover of Lucinda Williams' "Drunken Angel" are endearing.

Moments such as the quickly delivered list of lyrics at the end of "Confess" (channeling Isaac Brock) are excellent — in fact, all around this song is by far the best of the album by miles. Its only downfall is the decreased production value in places, a result of Harrington also producing his own material. "Confess" reaches great heights of guitar layers. It's gorgeous, epic, lush. But the transition from the first two-thirds of the song into the ending is too obvious. After a couple seconds of pause, "Confess" crescendos by nearly double without having to adjust the volume (though the guitar work is brilliant, so it's maybe okay to show off a little).

These quirks make Let Go Afterglow so personal, but also so desperately in need of an editor. It isn't is a bad record — it's simply so personal that at times it's so close, so painful, so unaffected and uninfluenced by anyone other than the artist, that it's jarring.

Ironically, Harrington came up with his band name and album title after purging 5200 pounds — yes, more than two and a half tons — of his possessions during a cleaning spree. "The album is about that moment of absolute satisfactions after letting go," he writes in the press materials. Why, then, aren't some of the less-than-great songs purged from this record?