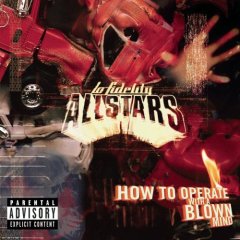 "Warming Up the Brain Farm" by the Lo-Fidelity Allstars

Somehow, I completely missed my iPod Roulette spin on Wednesday — it's just been one of those weeks — but at least I remembered for the end of the week. Today's spin is oddly appropriate and inappropriate.

It's appropriate because the one time I ever saw the Lo-Fidelity All-Stars during their brief window of hype-laden extensive was at CMJ in 1998. It actually was a pretty darn excellent show, although the poor Lo-Fi Allstars were blown out of the water by the act they were opening for, that being the Afghan Whigs (that, my friends, is a story for another day). "Warming Up the Brain Farm" isn't as much a song as a twisted introduction that really, doesn't make much sense. Some gems from the opening tirade include:

He dreams of becoming the scorpion that never sweats.

He talks of lascivious laughs haunting his every second as the clock spits clicks, time speeds by in the form of a neon snake.

I am now surrounded by hypocrites, liars, drunks, clowns, fools, sycophants and the desperate.

It's sort of like that X-Files episode where Mulder almost dies but is brought back by the Navajo… or even better, it's the musical equivalent to BtVS where they all almost get killed in their dreams. Except their dreams didn't have such killer turntablists.

Of course, the LFAS never lived up to the hype (which, I suppose, was mostly coming from NME, WUNH and the promo companies), and beyond their mildly popular hit "Battleflag" off of their debut, How to Operate with a Blown Mind, the Allstars have pretty much become the allstars of the used bin.