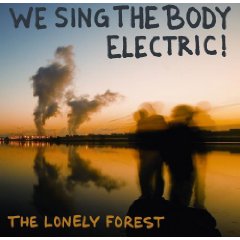 We Sing The Body Electric!

For those from of you who may have missed it, The Lonely Forest are a guitar-based indie rock quartet who’re the best damn thing to come out of Sound Off! in… ever. Centered around lead-man John Van Deusen’s blissfully energetic guitar and earnest vocals, the band has been creating a steady following since their formation in 2005 and are poised to take over the world. This isn’t the first time I’ve tried to write about this album either. The first time I tried to write about The Lonely Forest’s We Sing The Body Electric! I was confounded. It was an odd situation, I’m not normally faced with an album that I can’t seem to find anything to say about and I’m an opinionated putz, so what was the big deal? The big deal is that there isn’t much to say about The Lonely Forest’s We Sing the Body Electric! because it’s really, really good. That’s the big secret and the reason this review is giving me something of a headache.

What do you say about perfection? Or near perfection I suppose. OK, so it’s not perfect, but it comes so close at times that it gives you shivers. Actually, the whole album gives off this “shiver up and down your spine” feeling that you get when music is really that good. It’s the perfect combination of indie rock, piano balladry, pop sensibility and energetic guitar power. Each of the musicians, Van Deusen especially but also bassist Eric Sturgeon, drummer Braydn Krueger and guitarist Tony Ruland are fantastic players whose sheer musicality is sharp as a tack. The synergy between these musicians is astounding considering how the band has only been around about five years now. Some bands take a long time to really get it together, The Lonely Forest play like they’ve been doing this for decades.

Listening to the music of The Lonely Forest is like infusing your body with light drawn directly from the heart of the sun: a warm, crackling river of fire that makes you feel like you’re made of electricity. So effectively, when The Lonely Forest talks about “singing the body electric” they’re also singing about anybody who hears their music. And really, that’s the mark of good music is something that you can form a strong emotional connection with and while The Lonely Forest’s music can be depressing sometimes (see their album Nuclear Winter for details) it’s on the whole fairly uplifting. I was just discussing with a friend of mine the other day how Marilyn Manson’s Antichrist Superstar makes me physically sick when I listen to it. It’s not that the music is bad, it’s simply the combination of sound and subject matter coming together to make me feel like I’m going to die and therefore, I turn it off. The music on We Sing The Body Electric! while not always “happy” has the exact opposite effect. I listen to it and I feel like, not only am I going to live, but I’m going to have an awesome day, climb to the top of the tallest building, jump off and go flying for a few miles before I land causally in Discovery Park. Then, I’ll do a jig, because I just defied the laws of physics. Just so we’re clear: I’m not on anything, the music is really that good.

With all the good that We Sing The Body Electric! brings to the table, there has to be some kind of catch right? Kind of. It is a testament to the album’s brilliance that the catches are so small. Catch 1: “Golden Apples Of The Sun pt 1” feels to me like it could have been a longer song. But it’s made up for by the fact that there’s a part 2. Catch 2: The albums most famous song and therefore probably The Lonely Forest’s most famous song is the 3rd song on the album, “We Sing In Time.” The only conceivable problem with this is that the album deals its ace way too early. Some people will not acknowledge after “We Sing In Time” that there are other songs on the album that are just as good as that. But there certainly are. “Blackheart Vs. Captain America” is the true beginning of the album after the short intro of “Two Pink Pills” and it gets us rolling out of bed on a really good note. “Centennial” is another prime example of The Lonely Forest’s anthem making prowess. Both “Centennial” and “Blackheart Vs. Captain America” cause the metaphor train to ground to a halt, they’re both powerful rockers that’ll bring your soul out of hiding and make it feel nice and shiny. Huh. Maybe I was wrong. The Lonely Forest doesn’t make the metaphor train grind to a halt, it just turns it into the overly optimistic metaphor train. Nothing wrong with that.

It’s bands like The Lonely Forest that makes me proud to live in Seattle. They’re proof that we’ve got a lot to offer in the Pacific Northwest and that we’ve nowhere to go but up. I do fear, though: with society moving away from the full album experience faster than rats abandoning a burning ship (cliché metaphor ahoy!) I fear most people are going to just listen to “We Sing In Time” by itself. Don’t do that, take in the rest of this album, you’ll feel fantastic. Sure sometimes the situations bleak and we’re all going to die, but I can’t help but feel that the overall direction we’re headed in here is one of triumph over the darkness the corrodes us. At least, that’s how I feel listening to The Lonely Forest.