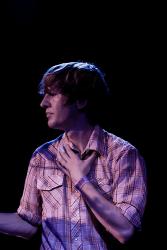 Cut Off Your Hands

We Are Scientists at Neumos

Even though the bill was full of bands from all over (Berkeley, New Zealand, and Brooklyn) the night was packed solid with outrageous talent.

The Morning Benders was a group I was told “not to miss” earlier this year at Sasquatch. It just so happened that I came across the great misfortune of a pocketful of completely loaded CF cards, which put me on par for a stop at the press tent instead of the Wookie Stage.

Harboring a mysterious penchant for Britney Spears (read guitar), the Morning Benders set things in motion with their precious pop sway-alongs. Lead vox, Chris Chu charmed his enthusiastic audience through the seyt, often urging them to sing along and insisting “I can see you guys! I’ve got a height advantage! Dance!”

New Zealand act (with one of the best band names I’ve heard in a while, might I add) Cut Off Your Hands totally caught me offguard. By chatting with a newly hired Stranger intern, I picked up a couple details on the band, but nothing she could have told me would have prepared me for the wonder to ensue. Often dropping to his knees and obtusely yelping into his mic, frontman Nick Johnston lay out all the jelly on his toast of a stage. Cut Off Your Hands definitely held its own. All I can say is that I’ve never seen a tambourine thrashed so hard. That’s all.

After witnessing the stripped down, acoustic side of We Are Scientists at KEXP earlier in the day, I was more than slightly concerned about the direction of the band’s sound. With the departure of drummer Michael Tapper in late 2007, the future of Brooklyn band We Are Scientists was ominous. Some time, a new drummer, and multi-instrumentalist later, the newly formed quartet poses as much a threat as ever before. Fortunately, all my worries were put to rest the minute the guys plugged in.

Opening with crowd favorite “Nobody Move, Nobody Get Hurt,” the night only improved exponentially. With the pepper haired and dashing Keith Murray shrieking the count off to several songs, I knew that the We Are Scientists I initially witnessed at Sasquatch two years ago were still alive in spirit. Several songs off the new album Brain Thrust Mastery were reenacted along with countless hits from the bands catalogue of pop gems. Their catchy, off the Richter scale in danceable-ness tunes set everyone’s dancing bones afire.

The banter between Keith and bassist Chris Cain was free flowing per usual, and consisted of talks of “literally shitting sorrow” (the show marked the last leg of the tour with friends in the Morning Benders and COYH), hotel parties, and silly depreciation/appreciation. Towards the end of the set, Murray hopped into the audience and stirred excitement (and terror, I’m sure) into the hearts of some as a roadie gingerly clasped the end of the mic cable in order to avoid clotheslining the entire front row.

The band put on a healthy set of roughly 90 minutes with no encore. Energetic sets were put on all around. Last night definitely marked one of the best nights I’d ever seen at Neumo's.

We Are Scientists (Photo: Chona Kasinger)

We Are Scientists (Photo: Chona Kasinger)