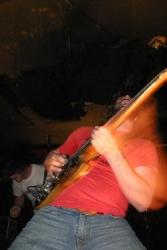 We Are Wolves with The Girls at The Nectar Lounge

DJ Not So Good had been brought in to spin between sets, and we were really impressed with his range and style. The first band up was The Girls, who set us up with some good quality post-punk: fast-paced with good electronics thrown in, reminding me of The Stooges crossed with a little PIL. The Girls appeared well seasoned and comfortable on stage, very charismatic and animated. They easily segued into a heavily keyboard driven, consistently high energy set that the smallish crowd really seemed to like.

Wikipedia's "Electroclash" entry reads as follows: "Electroclash describes a style of fashion, music, and attitude that fuses New Wave, punk, and electronic dance music with somewhat campy and absurdist post-industrial detachment in addition to vampy and/or camp sexuality. The movement combines the 1980s electropop/New Wave/Italo disco sound by means of synthesizers and drum machines. Visuals that are affiliated with electroclash often resemble or directly allude to post-1970s Westwood and Warhol fashion/art scenes" – And you know what? It describes the whole We Are Wolves experience perfectly.

We Are Wolves were the headlining act of the night. What a stylish group of boys! And they had props! They started their set with huge plywood skulls hovering above their heads – why? I don't know. It was cute though.

We Are Wolves are a 3-piece electroclash outfit from Montreal, consisting of guitar, keyboard and drums. They set the atmosphere and had a lot of stage presence. A high-intensity strobe went along with the music, all of it making me feel like I was seconds away from having a total seizure (but in a good way).

The band was tight stylistically and had a lot of sex appeal. The keyboard was a featured part of the whole overall sound, the drumming was simple but clean with solid beats (and the drummer stood during the whole set). At times, the keyboardist and drummer doubled up on the drums, which really added to the intensity. And I totally heart the French Canadian frontman, just frittering all over the place in his little cowboy boots.

Between songs, We Are Wolves spoke French to the audience and finished their set with a song entirely in French (although the vocals were a bit hard to hear on that one). The crowd, albeit tiny, really seemed to enjoy themselves as well. Overall, We Are Wolves really tore up the place. Hells yeah…