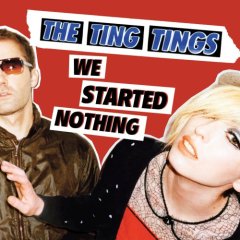 It was 30 years ago when Nick Lowe had to rename and re-sequence his debut, solo album Pure Pop for Now People. If the original title stayed as Jesus of Cool when it was made available to American audiences, and the new title was never used, it would make an excellent name for the Ting Tings’ debut album.

The Ting Tings, an excellent new pop rock duo from England, borrow liberally from Blondie, Dick Dale (the programmed guitar parts on “Fruit Machine” are very surf-guitar-ish) and Chic, amongst others, and there are 4 killer singles here (“Great DJ”, “That’s Not My Name”, “Fruit Machine” and “Shut Up and Let Me Go”) and 6 songs that are filler. That’s not what’s problematic – I have a stack of CDs on my desk that don’t have any more than 1 or 2 good songs – but what’s frustrating is that those four songs are track list numbers 1, 2, 4 and 5. Were hooks not allowed on Side B?

When I first heard “That’s Not My Name”, I thought it was the catchiest 3 minute song of the year – but the running time is over 5. Is that a metaphor for the rest of the album? It has a perfect, anthemic, sing-along chorus (”They call me her, they call me Stacy, they call me hell, they call me Jane, that’s not my name”) that is addictive but the song runs out of steam once it gets to an unfortunate bridge and then relies on repeating the chorus over and over again.

We Started Nothing crams all their singles with catchy hooks. Singer Katie White can deliver her lines perfectly in tune with the song’s tempo – just as any great pop star should. She even makes us want to sing along to songs with really bitter lyrics. The ballad “Traffic Light” slows down the momentum quite a bit, lumped in the middle of the four aforementioned songs and the remainder of the album never really recovers. The songs are just not as catchy and the hooks just aren’t there.

I remember when I first started listening to “indie” music back in 2001 and remember reading about all of the hype surrounding The Modern Age, a 3 song EP demo from a band that was supposedly about to save rock and roll from itself. The Strokes never did that (although they did have to settle for just being the best band of the first half of the decade) and a lot of people felt let down by Is This It? when it was finally released. I almost feel the same way about the Ting Tings. It was easy to see the Ting Tings as being the next big thing when 3 great and catchy songs were available all over the internet.

I’m not saying We Started Nothing is a disappointment or a let down by any means, but it is a pop record that lives and dies by the hooks. When a great song connects, like “Shut Up and Let Me Go”, which was so hook-y that it was used in an iPod commercial, it is almost magical but when they try to replicate it with songs like “Be the One” or “Keep Your Head”, the results just aren’t the same and they founder.

The Ting Tings have a have a funky, poppy sound that is often addictive. I’m not being critical as part of a backlash: I still haven’t gotten tired of “Great DJ” or “That’s Not My Name”. I’ve been listening to them for almost all of 2008 and they are both still in heavy rotation on my iPod and I still recommend it highly. I’m just saying this could be the best EP of the past 2 or 3 years but instead we have a record that is pretty-to-very good.