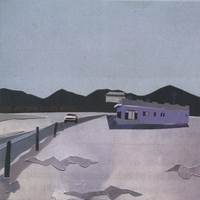 I could use strings of superfluous adjectives to describe just how good this album by Los Angeles-based band the Western States Motel is, but that would somehow leave dirty fingerprints on the record. I could also rave on about how completely mind-blowing it is that one guy does all the rich instrumentation on this album. But for some reason, I can’t put the Western States Motel, AKA Carl Jordan, on that pedestal. His music comes across so modest and simple, like a side-of-the-mouth smirk trying to mask something great, that I can’t bring myself to start shoveling praise.

Unlike Jordan, some bands just know when they release something of a higher caliber, and in turn, bask in the glory of admiration, whether it be critical, commercial, or both. And I'm not trying to imply that the greatness of the WSM is a mistake, but the entire record, from the catchy melody of "The New E Blues" to the thundering beat of "Cheap Speakers" to the sheer sonic dominance of "Southwest Planes," comes across as Jordan just making music – nothing more, nothing less – the way it should be done. This album sounds like Yankee Hotel Foxtrot, but only more succinct and collected. For those have seen the Wilco documentary I Am Trying to Break Your Heart, it's evident that the aforementioned album was the product of a lot of in-fighting and power struggling within the band. That energy gave it a sort of a scattered, fragmented, and ultimately beautiful feel.

However, being the sole proprietor of the WSM, Jordan was able to carry his vision, relatively untouched, all the way to fruition. And the end result is an album that is catchy yet experimental, out there yet still accessible. Jordan proves himself to be a very adaptable musician. He can convey the mood of a song using nothing but an acoustic guitar ("Powerlines"), or on the other hand, using a full box of keyboards, gizmos, and drum machines ("Cheap Speakers"). While this sort of adaptability isn’t unheard of, it's rarely carried out in such a breezy and understated way. This album is fantastic, bordering on timeless. This is definitely a strong contender in my favorite albums of the year category. Rarely will you find an album that is this close to genius that is completely untouched by pretension.