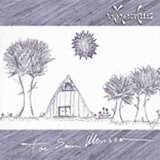 Wheatus is driven by big, biting rock guitars and unsparingly splendorous keyboard trampling. But mostly it's powered by an androgynous near-whine of the lead singer Brendan Brown and the lovely backing vocals of his sister, Liz, while their brother Peter drums beneath it all soft or loud (or however the situation requires). It's a perfect communication between band-mates, with bass player Nic di Piero, and Australian additional vocalist Kathryn Froggat, joining Michael Bellar's whooshing and spiraling keys to make this, Wheatus' third album, its most accomplished.

It would be nice to say that this self-released affair simply shows how well the band has bounced back since their horrid relational disaster with Columbia (the label rewarded the band's cleverness on the track "Teenage Dirtbag" off their self-titled debut with harassment for Brendan to "raise the timbre in his voice." What A&R genius!). Similar to Harvey Danger, if it weren't for the band's doting American and transatlantic fan-base, the corporate smack-down that led to their second album being called SUCK FONY probably would have doomed the band for good. But Too Soon Monsoon shows that Wheatus had a whole lot more to offer than a great bouncy pop hit sung with a shrewd sense of humor.

Save for one playfully vicious song written and sung by Froggtat, Too Soon Monsoon "was written, produced, engineered, and mixed by Brendan B. Brown. But doesn't seem like a one man job at all — and really isn't — as Bellar puts new things into every song, and the band plays up to the intricacies between Brown and his sister, and other vocal collaborators.

There are strong self-conscious statements throughout about dealing with bitterness, wrestling with fate, and fighting one's own urges to fuck oneself up. The album opens with "Something Good," which despite its awkwardly-retro John Mellencamp guitar riff has sharp opening lines about cocaine eyes and credit card debt before taking us further into, "The center of my mind (that) is a dark place that wishes it wouldn't do what it would." On the harrowing "The Truth I Tell Myself" Brown confesses, "There is no connection between what I want and what is good for me — I know that I would have been something but I'm not and I know that it's somebody else's fault, just like everything that ever happened to me." Taking total personal responsibility, Brown rejects the notion of a God that will save him — as well as in the album's ironically happy-sounding closer, "No Happy Ending Tune," in which he and his sister chime together about such a lack of faith or trust being possible in this world.

On Too Soon Monsoon, Wheatus creates a jewel of doubt and perseverance despite all obstacles. The best that can be said about this album is that halfway through, you realize it is an album, the way that albums used to be made, instead of just a collection of songs. The core of "I Am What I Is," "The Truth I Tell Myself," and the belated, somewhat maudlin but utterly sincere September 11th anthem "Hometown" in the center of this work relates the fact that a real human being with a genuine voice created this, in spite of critical attack and personal disaster. "It was so beautiful before," Brown sings, but there is beauty still, and a stronger one at that.