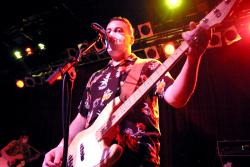 Where are the Clinic fans in Seattle?

A sense of cool lingers off every note from Clinic, as if you had just walked into the opening scene of a movie about a group of urbanites. As I found a spot to stand at Neumo's on Friday night, their music set the vibe of relaxed cognizance, their sound similar to the Velvet Underground, with touches of heyday Jefferson Airplane.

I looked up, seeing the signature surgical masks stretched across the faces of the players of the Liverpool band; however, they were wearing hawaiian shirts, not scrubs. Most music writers will point out this schtick as a neat aspect of the band, I couldn't help but think of how uncomfortable the heat from the stage lights would become while trying to breathe behind the pieces of fabric.

By the end of the first song, I noticed something was amiss. There almost seemed to be a lack of enthusiasm in the air. My first thought blamed this on the microphone cord calling it quits, a crackle taking the place of the singer's voice. However, with the sound guy on top of his game, the error was fixed and the smooth voice accompanied the instruments. Still, the crowd was not quite there, the clapping a bit lacking, an unsteadiness in their manner.

Possibly it was the late August-like heat intruding in mid-May — Neumo's lacks a means of air conditioning, the venue becoming hotter than "the Loveshack." Or perhaps the dark cloud of doom hanging over the space was putting a damper on spirits. Signs posted on every door-jamb explained the current struggle, music venue vs. The City; the fire department was being escorted by tattooed black-clad stagehands around the entrance as the audience lined up for tickets.

The lack of enthusiasm could merely have stemmed from those in attendance. As the music carries a level of hipness, it seemed some came just to be part of the scene. Talking overtook the level of sound in the air above the music. A chick nearby loudly proclaimed, "I'm BORED" before grabbing another drink. Thinking I was being overly sensitive, I stepped out for a moment and heard someone else exasperating the same observation of our fellow inattentive crowd members.

As Clinic explained, they would be playing two halves of their set; this would serve as reprieve for the ill-mannered crowd. Those who found more pleasure in yapping must have missed this announcement, because as the band wrapped up their first set at the half hour mark, I witnessed a rushed exodus to the doors. The showroom, now stripped of all those who weren't interested, contained the half who were genuinely ready to dance, and Clinic served up. The second set consisted of their older material, the songs which are more alive and pop. An upbeat build-up occurred, setting off at their encore with "The Return of Evil Bill," everyone moving their feet, a few grinding hips and waving arms.

I am a bit ashamed of the attitude delivered to Clinic from the first half of the show; I hope the second half mended the insult. Perhaps when they come again, a smaller venue just to fit the honest fans in would accommodate the better atmosphere the band deserves.