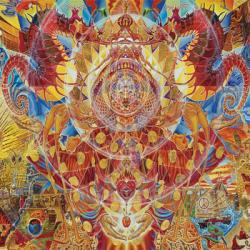 Made In China Records

It’s no surprise that Portland, OR band’s White Orange is fronted/fully finessed by a hands-on studio owner and full-time acid-axe victim. Adam Pike sits in the corner of Pac NW’s rock dungeon basement, egg-shell sheets all over the incense-drenched walls, orange crates of the most lysergic-infused hallucination-crunch hard psyche LPs near his feet, as he plays with some gimmicks box and weird tuning and drops long cigarette ashes into the denim cuff of his greasy jeans.

His self-titled nine track White Orange album easily shows why his Toadhouse Recording House skills are in such frenetic demand: Any raunch riff-based band (for example, Red Fang, Norska, Rabbits) would crave to sound this futurist and primitive-brutal all at once. Pike is a Sinatra of the dummy-headed bad-trip existential vocal, spinning turgid journeys through The Sword and Nebula style virtual reality doom stomp. Contemporary artists of this style often have the licks, but don’t have the bottom end; White Orange cranks and throbs deep inside the crust of the lurch-groove (“Middle Of The Riddle”), then sprightly trills into pure cosmic pop pleasuring (“Dinosaur Bones”).

The tempo from box-cutter opening “Where” to drain-dirge “Sigourney Weaver” features changes which aren’t break neck, and often the layering of simple rhythms with basic chords beneath it all shows Pike knows his “rock” as much as his “art.” Every element is clever, like with Queens Of The Stone Age, but sounding more 19 and life to go than mass-expressive vets. That’s the thing: It’s somehow both post-grunge, with a more innocent transgressive vocal style (almost but not quite 1970), and pre-pomp irony. It evades those excesses by glorying in its own.

A confession: The album’s gorgeous/grotesque cover at first kept me from examining the sounds within — I wanted to frame it more than play it. That was a big mistake, as this isn’t the sort of experimental psyche-outs better left out to freak out the non-heads, and much more the kind of incredibly catchy showcase for a real songwriter set lose with self-created playfulness. This isn’t an album to own to feel cool — it just looks like it. It’s more an album to play over and over again, before passing out on that filthy couch alongside your also-tripping heavy rocking comrade. Just remember to snuff those butts out; basements can burn up.