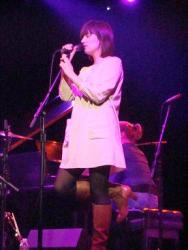 White Hinterland/Taken by Trees at the Triple Door

The Triple Door is always a wonderful place to see a show, particularly an unexpected show in the middle of the week, so spirits were high yet mellow on Tuesday night. We arrived on time and were shown to our seats by the ever-so-gracious staff and settled in for a night full of good food, good wine, and good tunes.

The opener, White Hinterland (from Boston) was a simple two-piece, a girl with a tiny ukelele and a boy on drums. They started their first tune "Out on the Front Line" with a low-fi 50's era drumbeat and plaintive vocals that I can only describe as Icelandic in tone. It seems like there are a lot of female-fronted outfits out there lately that sound this way, kind of Bjork-y, but maybe it's just me. At any rate, it's simple, good-natured and charming, especially the way the Casey Dienel (herself a TIG fave) kept standing on one foot as she sang. The second song was very captivating, musically, starting out with an Erlende Oye-type drumbeat and Casey D. pounding on the piano keys, giving it a kind of "Peanuts" feel, it was way upbeat. It grew much larger as it progressed and then ebbed back a little.

Dienel informed us that the new record came out that day (3/4) and she felt kind of like it was a birthday. Cute. The third song began kind of muffled and had elementary piano chords, which was nice to hear alongside her sweet voice. She seemed a bit more relaxed at this point. The lyrics got a little somber "…combat boots and bones in clay – no one wants to believe you died in vain…" – it was a good song but it got a bit rushed and tripped over itself a bit near the end, though they recovered nicely. The next song had a bit of a tropical, lazy feel to it but stopped abruptly which was a good effect. This was followed by a really gorgeous concert piano piece with weird, low tympannic hum accompaniment, along with some whistling, deep gong sounds and xylophone additions. The whole effect was very well orchestrated and made me pine for the fjords a little bit. Overall, I'd say this is good Sunday afternoon music, all very pleasant and relaxing.

Shortly thereafter, Taken by Trees took the stage, beginning with a very nice video of foresty stuff, tulips and trees growing in that stop-motion style with pseudo-Asian styled music, very fairy-like with trilling flutes and violins. The band started in with a single piano chord, a single drum beat, one vocalist and one acoustic guitarist. The first song was "Julia," with a plodding beat and good acoustic presence and creative use of percussion. Victoria Bergsman kind of looks like Karen O. on a very good day. The second song was a bit more complex, with acoustic guitar dude bowing what appeared to be a xylophone. The vocals were hollow and were accompanied by good staccato drumming. Although this is a full four-piece band, the emphasis did seem to be primarily on the vocals. The backing music really complemented her voice, which easily commands the most attention. The guitar was lovely and flow-y and reminded me of running water, and the drums were perfect.

As the set went on, we were treated to the use of a variety of different instruments including a harmonium, a triangle, this dual recorder thing I don't know the name of, wooden blocks and more xylophone to boot. Stylistically the band gave us samples of country, a little "no depression" bluegrass, and a little 60's garage. More than once I was reminded of the Cowboy Junkies. Most songs began simply but grew more complex and sometimes a bit anxious and frenetic, often ending abruptly.

They finished their set and took about a 10-second break before performing their cover of "Sweet Child O' Mine" as an encore. You can never mistake that opening riff, even when it's on a piano and not a guitar. The drumming was very Bat for Lashes-inspired and I had a hard time deciding whether I preferred this version of the song to the Luna cover – it had more "oomph" for sure. Victoria B. was simply adorable, and apparently the singing-while-standing-on-one-foot thing was a theme that night. The band finished the song with a very full sound and ended with a bang and then were gone, just like that. If I had to pick one word to describe all the music of the night, it would be "simple," but not in a bad way: just very refreshing and unpretentious.