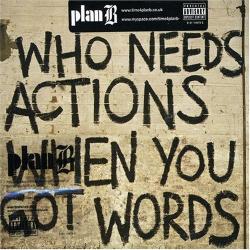 Who Needs Action When You Got Words?

I tend to fall prey to all sorts of hype from the British press. They apparently know a sucker when they see one, so Americans go tripping over themselves to hear any UK import that has gotten written up in NME or the like, and Plan B joins the cavalcade of English musicians that are supposed to be the “next big thing. Plan B has been praised as the next coming of Eminem (that is supposed to be a good thing) or a darker version of Mike Skinner and the Streets. However, there is just something that doesn’t click with me and his debut Who Needs Action When You Got Words?

Plan B has that same style of rapping as a lot of British hip-hop stars such as Dizzee Rascal, Wiley, and Mike Skinner. It has much more of a speaking tone that what most American hip-hop fans might be used to and it might just be the trickle down effect of these Brits being influenced by folks like Slick Rick. Plan B himself (aka Ben Drew) is kind of a hip-hop prodigy, recording his first hits at the age of 19, but he isn’t as singularly a rapper like Mike Skinner. Instead, he seems to flit back and forth from both rhyming and actually carrying a tune as he creates vignettes on the characters he’s created. Although the albums starts off with the promising “Kidz,” one of Plan B’s first hits, it just can’t keep up the pace. “Kidz” has the same productive style of Dizzee Rascal’s latest Maths & English and Plan B keeps the song buzzing along from start to finish, although some of the lyrics are a little, well, odd (”and I’ll just stick my ding-a-ling in her snatch”). “Sick 2 Def” is similar, with a lot of rather disturbing imagery set to more of an Eminem like slow jam, but here is where we start to see that although Plan B obviously has lyrical skills, something about his delivery just doesn’t mesh with the music.

The other Achilles Heel for Who Needs Music When You Got Words is the dated production that dominates the disc. “Dead & Buried” tells the tale of a fellow who dabbled with the wrong type of women but the backing music to Plan B’s lyrics sound like something from the late 90’s. This is just appalling, especially for a UK rapper surrounded by so many great DJs and producers. This is a recurrent theme on the album and renders a lot of it just painful to hear (see also “Charmaine,” a song that might show some of the lack of maturity in Plan B’s lyrics). “Missing Links” suffers from the lack of the Radiohead sample that propelled the original (and subsequently changed, thanks to the lawyers) version – if you can track down the bootleg version of the song, it's well worth your time.

You do get some good turns on the album, like “No Good” or “I Don’t Hate You.” The latter is especially satisfying, with dark strings backing Plan B and his guitar – it adds a little variety to the production. This is combination is expanded on “Everyday,” a song that could very easily for an odd hip-hop influenced solo/monologue from a modern musical. The paranoia that Plan B creates in the song shows that he has a deep well of talent from which to draw. “Where Ya From” takes a little more interesting musical turn, combining a backing track that has a bit of an Aphex Twin feel with Plan B’s rhymes.

Who Needs Action When You Got Words might be a similar listening experience to the Streets first album Original Pirate Material in the sense that it takes a long to time fully comprehend what is contained on the album. You can tell that Plan B has talent and vision, but the album overall does not put his best foot forward. Instead, it feels a little scattershot and disjointed as he grasps for his true sound. Plan B is clearly a hot prospect on the British music scene, now we just have to wait to see if he can live up to the hype.