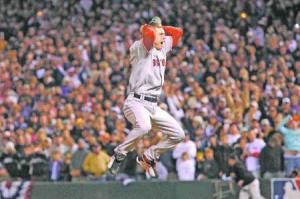 Ok folks, today I'm cheating. This is not the first song that popped up. Instead, this is the song that I've listened to about 100 times so far this morning. Why? Somehow, someway, it has become the unintentional theme song for my last few weeks watching the Red Sox win the World Series (again … and for those of you thinking "oh lord, not again," I promise this will be the last spin in a while that concerning the baseball team from Boston).

It's especially odd considering Matthew Sweet, the song and its source have nothing to do with Boston, but it melds perfectly with the mood this has put me in. The song itself is from the soundtrack to Big Top – a soundtrack that isn't even out yet (you can here the song here.). It might be the best thing Sweet has recorded in years, even if he didn't write the song; instead it was written by the guy whose movie it accompanies. That being said, this song will now forever be associated in my head with the Red Sox winning the World Series this year. An endless highlight reel will spin in my head when the Sox comes up, much like the much appropriate "Dirty Water" by the Standells or "Tessie" by the Dropkick Murphys for the 2004 Red Sox.

It's funny how just the accidental juxtaposition of music and events can forever and indelibly alter a song's context for the listener. That is postmodernism at work folks, in all its majestic (and bewildering) beauty. And as much as my head can't concentrate on much after all the beer and champagne from last night, I can just sit back and listen to "Wild" over and over and soak it all in. Really, there's nothing like it.