Win tickets to see Noah and the Whale at the Crocodile 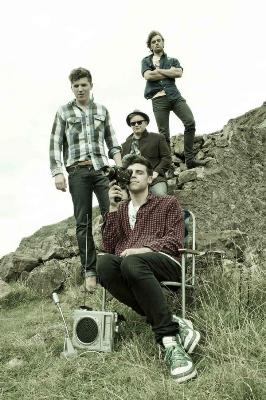 British indie-pop group / filmmakers extraordinaires Noah and the Whale are making the swim across the pond, touring on their second album The First Days of Spring (stateside release 10/6/09) and will be coming to the Crocodile on October 24th. The film they produced runs the entire length of album, like a well-polished version Pink Floyd’s Dark Side of the Moon and the Wizard of Oz. The band’s website explains: “The narrative of the film and the narrative of the album are not the same but they are complimentary. So for those of you expecting a R Kelly style opera you will sadly be disappointed …or perhaps pleasantly surprised.” Preorders of the limited edition CD / DVD combo can be made at www.insound.com.

Many changes have taken place for the band both in sound and personnel since the release of their first album. The First Days of Sping does not use female vocalists, has a more cohesive story arc, and has more electric instrumentation.  It was also announced on August 28th that drummer Doug Fink, brother to lead singer Charlie would be leaving the group to attend medical school, making a joke at his final show with the band that he would be back in “5 Years Time.”

You might, beloved reader, be thinking, “That’s nice, but what does it have to do with me?” The answer- if you enter the Three Imaginary Girls ticket giveaway, you and a friend will receive a free pair of tickets to attend the 10/24 show! Simply send us an e-mail at [email protected] with the subject line “firstdaysofspring” by Tuesday, September 29th at 9:00 AM.

For more information about Noah and the Whale check out their website link as indicated above, or their MySpace page.

For your viewing enjoyment, please enjoy the video for “5 Years Time.”