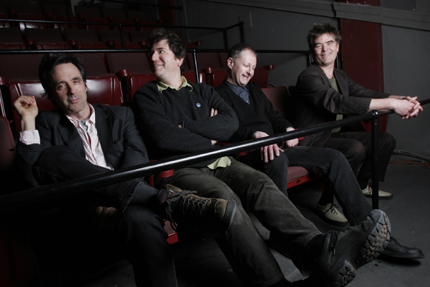 Proof: if you happened to be in Boston on October 4, less than a month ago, you were in Boston on Mission of Burma Day. Even more convincing, even Wikipedia loves MOB:

Mission of Burma’s efforts are largely concerned with extending punk’s original vocabulary without losing its essential rebellious spirit. Using rapid shifts in dynamics, unconventional time signatures and chord progressions along with tape effects, Mission of Burma challenges the prevailing idioms of punk while attempting to retain its power and immediacy.

The converse of which is that the exact opposite of the percentage of people who love Mission of Burma is equal to the same percentage of people who like paying for stuff. So, we want to send one of our readers (and a guest) to share in the love of MOB live at the Crocodile on Wednesday, November 11. Just e-mail us by Monday, November 9 at 9am with “BurmaIsNowMyanmar” in the subject line. One name will be drawn at random and it’ll appear on MOB’s guestlist  +1 on Wednesday night.