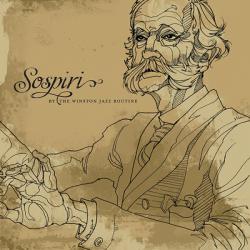 When I first picked up Sospiri, the latest release from The Winston Jazz Routine, I was silently preparing to drop a wordy, academic jazz review rife with terms such as "syncopation" and "slide slipping." But my dreams of reveling in the glory of bebop were halted as soon as the first chords of this album sounded. The Winston Jazz Routine is neither jazz, nor a routine. Discuss…

After my initial disappointment and anger at the trickery of indie pop bands with ironic names, I realized that the WJR isn't half bad, and justly delivers the musical equivalent of sospiri, the act or sound of sighing. This entire album – a clever concoction of keys, strings, and pianos – feels like relief, like the band is getting something off their collective chests. There is never a moment of anticipation, melancholy, or pure joy.

Sospiri is simply the audio equal of a Catholic confessional; you don’t feel better or worse after listening to it, just lighter, less constrained, and a little dirty. "The Physician" is a prime example of the abstract concept of sospiri. The song doesn’t rise and fall; it just makes the listener feel relieved, like the unbuttoning of pants after Thanksgiving dinner.

This lack of suspense and drama in the record does create a pretty static experience, making Sospiri one of those albums you have to be in the mood to actively listen to, otherwise it simply blends into the walls. However, if due attention is paid, this album is full of nuance and subtleties. While the Winston Jazz Routine lacks the improvisation and energy that its name would lead one to believe, Sospiri creates its own kind of muted energy and atmosphere.