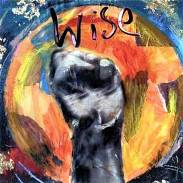 The Wise CD is the kind of album I like to listen to while I'm driving. More exactly, it's the kind of CD where I like to listen to the first 20 seconds of each of the first three tracks, then do a little fast-forwarding, and then listen to the first three seconds of each of the remaining tracks. Then I like to take it out of the CD player and throw it onto the floor in the back of the car. This is great music for disposing of with the soda cups and newspapers when you finally get around to cleaning out your car.

According to the Wise website (which makes me feel drunk in the bad way), Wise is a one-man project of "emotionally driven punk rock music" created by proud-to-be-a-Brooklynite David Weise. Wise is maybe like Alice in Chains — without the chains part — rockin' a garage on Sesame Street. I actually think the guitar work could be pretty rockin' if properly produced and pumped up. Wise have crafted some catchy licks and guitar effects. But the overal result still strives to reach average — and fails.

What throws the music into the back seat are the lyrics. I wanted to cite some here, but in text and out of musical context, they don't sound as corny. They're frightfully corny, and in severe need of production and vocal toughness, and… ah hell, how about my favorite chorus…?

This song is called "FBI" — do I have to say more than that? This passage highlights the number one thing I hate about this album — the repeating lyrics. God bless you for making music, but please stop saying the same thing twice every time!