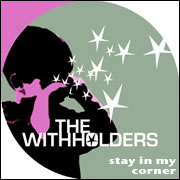 Stay In My Corner

What?! The Malinks are over? And it's been a whole year. Where does the time go? Where do the great bands go, the bands you love but never end up scoring huge deals?

Leader Chris Lorraine led 'em on three tours, got 'em highly praised by the more intelligent reviewers in the local media, and a song of theirs even ended up on an Xbox game soundtrack. All those things should have kept things going, but it takes a lot more than that to survive sometimes.

Lorraine (here tagged Valbert Smart) married Shannon Brockway (Aubrey Smart) and started something new with her, recording Stay In My Corner under the moniker the Withholders with producer Johnny Sangster (the Makers, Mudhoney). They create a basement rock that seems lazy sometimes — for example, the joys of domestic security celebrated in simple terms over Buddy Holly guitar rumble on "Anhalt Arms," until the till the chorus kicks in, as ambiguous as it is 60s-radio catchy ("Please don't change what you mean to me").

It's fitting that LitRag — a non-profit arts publisher — will be putting this eleven song album out in late August, as it is as literate as any literary journal, and is perfect summer music. The clean bash of the guitar strings on steady drumming, as stories flicker between self-assurance ("I Can Make It On My Own," with lovely vocals by 'Aubrey') and the clarity of regret ("Harsh, Harsh Light").

That's what's weird about this record. For an album created in the first year of a marriage, as fresh as the music seems, lyrically it's mostly baggage. It's almost as if 'Valbert and Aubrey' are exorcising demons of past relationships — or perhaps creating characters to sing their doubts and fears through. Insecurities about feelings and social behavior dominate, as on the rollicking "Rollercoast" ("My heart won't quiet down"). Then again, there is that warning of getting art mixed up with the artist that I should probably remember.

The songs on this CD-R are nicely written, chock full of hooks, but I'm hoping that the eventual release will be after further mastering, as there is a certain restraint to the mix. I keep wanting the album to bust out into some chattering feedback, sloppy drumming, something that tells me these aren't hobby-songs. For what they are, these are somewhat quiet, nervous slices of daily life, represented best by the clattering counter-percussion of the skin-crawling "Harsh, Harsh Light." More of that energy in the instrumentation and production would have forced this debut out of its corner.