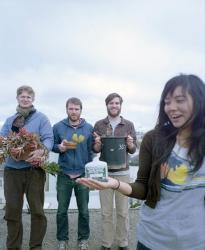 On a Saturday night, parking is just about impossible in the bar/venue area of southern Capitol Hill. It's worth braving the mile+ walk, though, if there's a show or bar that you really want to be at. And I really wanted to be at Chop Suey in time to hear the Pica Beats, a band newly signed to Sub Pop offshoot Hardly Art, but no such luck. Parking plus a half-hour wait to get in the door at the club ensured that I'd be just in time to get a glass of water before the second act, Thao with the Get Down Stay Down.

I found out about Thao when I was haunting the Kill Rock Stars site a couple months ago, and I've been humming her songs ever since. Thao uses unusual note combinations that I'm going to call slant vocals, notes that are almost off-key but somehow fit perfectly into the pattern of the song. The best example of that on Saturday night was her song,"Swimming Pool," during which Thao broke out a banjo to accompany her slanted summer anthem.

The crowd at Chop Suey was biggest during Thao's set; her body was in motion almost the entire time, and both the audience and her band mates seemed to feed off this woman who throws her head back to sing (mainly to get the hair out of her face). Another thing I noticed was how the small, intricate details in the band's music lifted the set into something that the people outside would rave about later as they were sucking their cigarettes down before Xiu Xiu's set.

Xiu Xiu was the second band I'd seen in two days that was using unusual instruments: Caralee McElroy had a hand-pumped piano of some sort that along with the standard keyboard. The whole stage was crowded with instruments, from gongs and an electric upright bass to cymbals the drummer had to stand to reach. Later on, a melodica made an appearance or two; I guess it's what you'd expect out of a post-punk band these days.

Jamie Stewart's voice was just as eclectic and cluttered as the stage around him: on quiet low notes he used a breathy warble, then he'd crescendo to a bellow drawn up from the gut for the louder noise rock sections of a song. Stewart's emotive dramatics are pretty much what make or break whether you like this band, I think. The highlight of the night was during "Apistat Commander," when Stewart sang "all that you left, you left for someone…oh my god, oh my god" while literally beating his own drum–it was like seeing someone rend their shirt in grief. Not everybody's cup of tea, but man. Beautiful. Pretty much the only complaint I have about the set was that Xiu Xiu left the stage and didn't come back despite a lingering/chanting crowd.