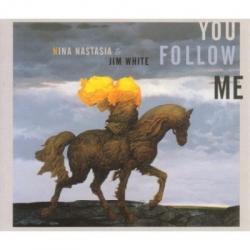 As great as Warren Ellis' violin playing is, the drumming of Jim White has always been the most fascinating element of the Dirty Three's sound. He tends to play more expressionistically, working around a drum beat rather than with one. In the context of the Dirty Three's meandering, moody instrumentals, it works wonders to create a backdrop that flows underneath the violin and guitar interplay like a curtain flowing in the wind.

To hear White out of that context is always a fascinating thing. As a member of Cat Power's backing band, he hems in his attack, playing sparse, funky beats over which Chan Marshall can vamp and swing. On this recent collaboration with singer/songwriter Nina Nastasia, however, he comes at the songs from both angles, thrumming underneath like a flurry of insects on some, and on others sticking to a strict rhythmic course as he follows Nastasia's strident guitar chords.

What White has also done is freed Nastasia up a bit on this recording. Although her previous works have been absolutely gorgeous collections of moody, earthy folk/pop creations, she is let loose on this album, with songs that sound like they are being made up on the spot. Not in some farcical experimental manner, mind you, but what come off as organic flashes of inspiration. They surely put much more into the songwriting than that, but the album's raw quality really stands out here.