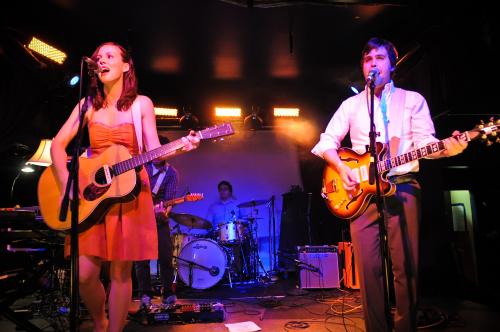 Why haven’t you heard of Walking Sleep? Well, no you have NO excuse because you’ve forced me to demand that you listen to them. I’d apologize, but this is for your own benefit. Trust me.

A little back-story, perhaps? I’m glad you asked. About two and a half years ago some little band named The Flying Tourbillon Orchestra requested my friendship on MySpace. I’m usually pretty picky about which bands I add, but something told me that I should give them a listen. Well, I did and instantly fell in love with this dreamy little indie-pop outfit out of Los Angeles, who describe themselves as “a six-piece band [who] came together as the natural extension of lead singer Hunter Curra’s exploratory songwriting, in which he combined male and female vocal harmonies, classic rhythms, and curiously dark lyrics. Drawing influence across genres and decades, their songs include echoes of the melancholy psychedelic pop of The Zombies, the uptempo stomp of classic Motown, and the moody melodicism of Fleetwood Mac, but placed in a modern context, akin to bands like Belle & Sebastian and The Shins.”  I obviously accepted the request and started promoting them to anyone and everyone I could find. Get this, not only are they incredibly talented musicians, but they’re some of the sweetest people alive. We kept in contact and they even sent me a little love package with a free t-shirt, their Escapements EP and a little post-it note that read “<3 FTO”. Okay, how much cuter can you get, right? I know!

Since befriending these lovely musicians, I’ve dreamt of the day when they’d made their way up to Seattle so we could all finally meet. How lucky was it that they just so happened to have a show on April 26th, the first day we found ourselves arriving in L.A.? I nearly exploded with excitement and immediately posted a little something on their MySpace a few weeks beforehand mentioning that I was on my way down and would be at the show.

This past Monday night, despite a few car troubles, we made it out to Echo Park in Hollywood to see the newly renamed Walking Sleep. They started playing their set and I couldn’t keep the grin off of my face. I never thought this moment would come, but here it was happening right in front of me. I figured that maybe after the show I’d go up and say “hey” and they might know who I was and I’d go buy one of their CDs and bask in the awesomeness that was their show. What I did not expect was for Hunter Curra (lead vocals/guitar) to ask if I was in the audience and proceed to introduce me to the entire venue (I KNOW, right?!). After the set, we hung around for a little bit before the band, one-by-one, filtered over with their friends and introduced themselves to me (as if I didn’t know who they were). Apparently, I was well-known. Talk about surreal! Who knew that they were just as excited to meet me as I was to meet them. I still can’t get over how absolutely amazing they were.

Their first full-length album, Measures, is set for release on May 25th. I was gifted a copy at the show and I just cannot stop listening. It shows tremendous growth from their older work and has already found its way to the top of my favorite releases for the year. So, do your ears a favor and check them out. My ears are crushing pretty hard, and I’m sure yours will be too.

Check out some photos from the show on Flickr.