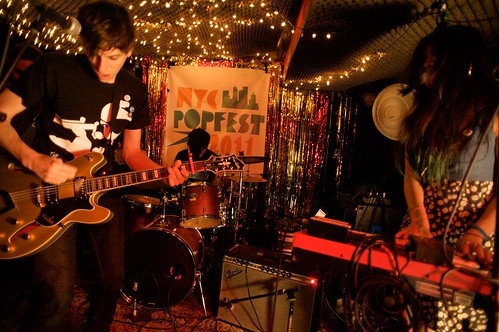 The fifth anniversary of NYC Popfest kicked off with a sold-out show at the Cake Shop with headliners the Pains of Being Pure at
Heart, who were announced to the opening night bill only a week before the start of the festival. (Talk about a pleasant surprise!) Pet Milk {hailing from Philadelphia} started the night in strong fashion, belting out amiable noisey-garage pop tracks. The impending rumour that May 21st would be the end of the world didn’t stop Pet Milk from playing an upbeat catchy pop number called “Christian Solicitors,” which managed to making us feel like it wouldn’t be a bad thing if they were one of the last bands we ever saw.

Both Amida {from the UK} and Sea Lions {from Oxnard, California} were on the bill as well, and while they suffered slight sound issues in their respective sets, both acts managed to save face by carving out sweet jangly numbers — much to our appreciation. Gold-Bears {from Atlanta, GA} were undoubtedly the band to watch this night: lead guitarist Jeremy Underwood slayed on his guitar non-stop and was glued to his mic while his bandmates jumped up and down on almost every hit they played. Their set received more even more applause and cheers when Kristine Capua from Tiny Fireflies came on stage to join in on a few songs. Gold-Bears definitely brought the party. 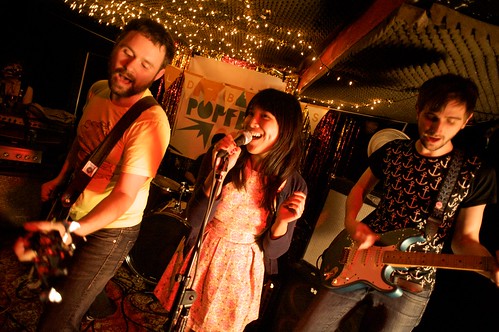 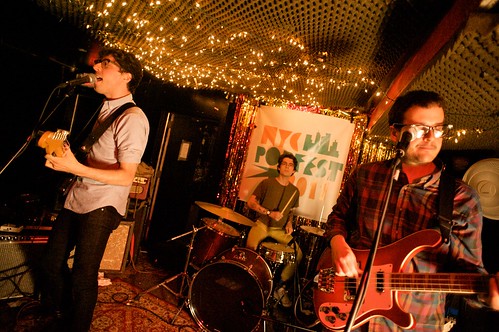 After Gold-Bears, New York’s newest dreampop darlings Dream Diary played a pure set of shimmery, lush tracks to the delight of the crowd.

The POBPAH were welcomed to the stage with cheers and played through a furious set of songs fresh off their newest album Belong. Lead vocalist and guitarist Kip Berman praised NYC Popfest, remembering the time fondly when the band played back in 2007. As their encore, Berman came on stage and played “Contender” as a solo arrangement. Too much!

Friday started with a free daytime show at the Paul Smith Sale Shop in Brooklyn featuring Ian and Emma of Pocketbooks and Rose Melberg. DJ
Victoria Bergsman (of Taken by Trees / the Concretes) provided the house music while folks enjoyed free snacks and drinks, and Ian and Emma played their sweet boy-girl harmonies — performing a touching cover of “It’s Love” by the Softies, which was strangely fitting in a high-end British clothing shop setting. 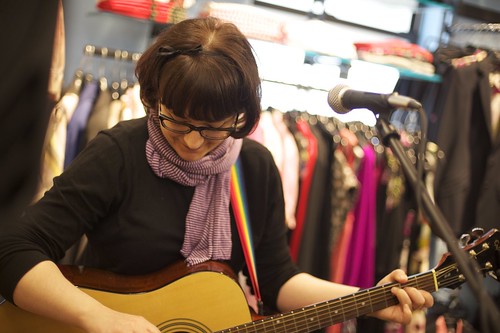 Rose Melberg charmed the crowd with a mixture of her own songs, covers, and a song from her new band Brave Irene (on Slumberland). She was slated to perform “It’s Love” but since Ian and Emma performed the song earlier, she showed great poise in letting that stand out for the crowd to enjoy. The highlight of her set was easily the old Softies hits she did perform, including “Charms Around Your Wrist” and a request from a fan in the crowd, “Golden Gate Bridge.”

Friday night was another sold-out show, this time at Cameo located behind the Lovin’ Cup Cafe in Brooklyn. Japan’s Caucus burst onto the satge, and singer / guitarist Hiroko Kawakami affectionately introduced the band to the crowd saying she was happy — “I am singing in New York City” and that it was “amazing.” Caucus roared through a technically sounds-tight set that left the crowd wanting more. One act later, we were treated to the endearing pop explosion that is Betty and the Werewolves {from London.} Near the end of their set with the crowd going wild, Emily Bennett’s guitar gave up mid-song; the band didn’t stop and Emily dropped her failing instrument and continued dancing as if this minor failure was nothing in comparison to playing in front of an enthusiastic crowd. 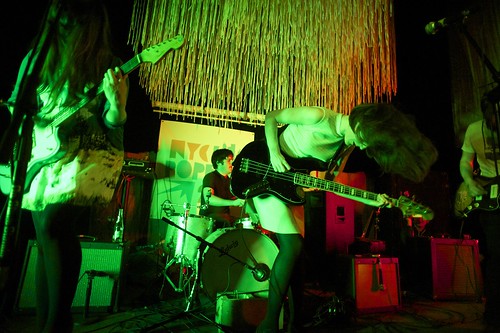 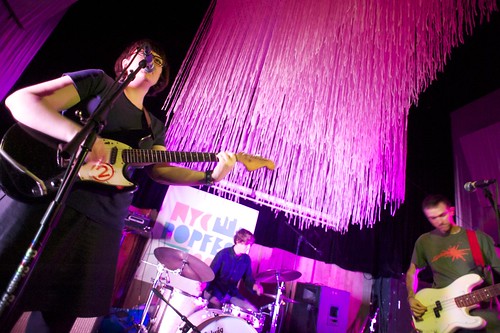 To close off the night, Go Sailor played to a fanatical crowd, with the front rows singing every lyric to every song sung by Rose Melberg. The crowd continued shouting unrestrained devotion to the band, and dancing all about — which culiminated in a few crowd surfers. Crowd surfing! During a Go Sailor set!!

The next day {Saturday already?} turned out to be a beautiful sunny afternoon in downtown Williamsburg, with a packed all-day lineup starting with a free show at Spike Hill. Walking into the bar, people were greeted with the tropical / electro pop sounds of New York’s Balún, whose members hail from Puerto Rico. After their set, Geoffrey O’Connor meticulously set up his laptop, mic stand, a foot stool and a guitar amp. Singing behind backtracks with the price tag on his guitar still attached, the Australian solo artist slithered around stage, slinging his mic over his shoulder playing a few riffs, then hopping back on the mic, then standing on the foot stool and swooning the crowd like the modern day Jeremy Jay.

Smilelove (comprised of members of Caucus) were up next and continued their tight indie-pop-rock from the night before with a cover of Nodzzz’s “I Can’t Wait.” 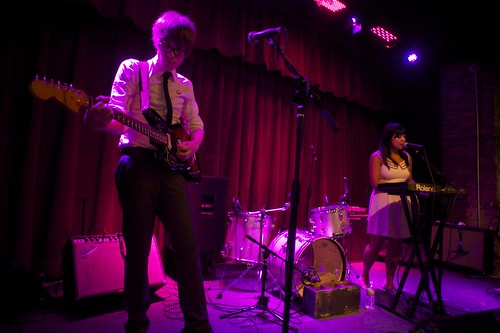 Tiny Fireflies {hailing from Chicago} were the surprise favorite band of the festival. Through a harrowing adventure of a cab driver (who didn’t want to drive them from Manhattan to Brooklyn for the show) that ended up costing them more money than they expected (and with the driver almost driving away with all their instruments), Lisle and Kristina — though nervous — impressed the grateful crowd with a set of drop-dead dream-pop gems reminiscent of Trembling Blue Stars, New Order and the Radio Dept. The Specific Heats {from New York} brought a jovial, raucous 60s-pop feel and sound to end the daytime show — complete with band members donning capes. Their frantic set felt like it was over in no time, but held long enough in people’s minds that this was one of the last shows where one would be able to enjoy the onstage banter of Mat Patalano on guitar. Or was it their last show, period? In any case, wow. Get me a cape!

Saturday night saw the Popfest at Santos Party House near Canal Street with the Cuffs, Chalk and Numbers, the Sunny Street, Summer Fiction, Darren Hanlon and Days from Sweden performing. Cuffs played a tight opening set debuting their new seven inch Privilege, Chalk and Numbers played their first show as a band (ever!) and the Sunny Street brought their new-wave pop from London, ending with a popular cover of Haddaway’s “What is Love (Baby Don’t Hurt Me).” 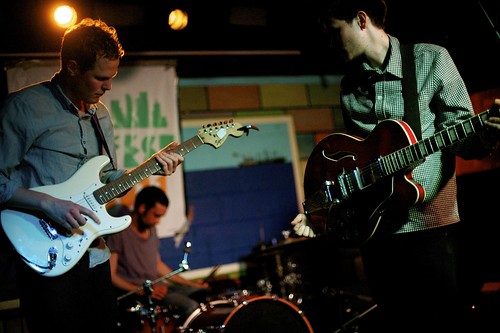 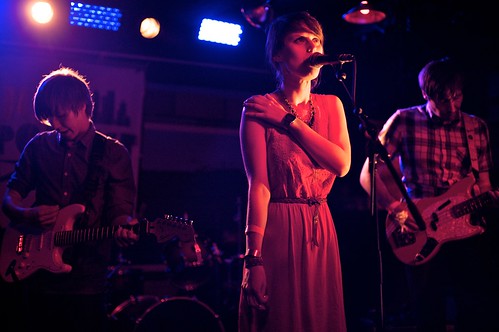 The evening’s mood took a slight turn when Summer Fiction came on stage to play more of a folk-fused pop set and was followed by the solo of Darren Hanlon, playing acoustic songs. While the tone definitely changed, it was still enjoyable as Darren’s songwriting and amusing storytelling came through the quiet — plus he was joined by Rose Melberg on a few duet numbers. Following Hanlon, Days from Sweden took the stage to a huge ovation and predictably executed songs off their Downhill EP to perfection, with a few new songs added in much to the pleasure of fans. Having run of out songs to perform an encore, the night was continued on with an indie dance-pop party til late.

Judging by these three nights of Popfest alone, it’s clear this festival is THE destination for indie pop lovers and should be on your music calendar every year to attend. The end!

View all posts by Steve Louie →