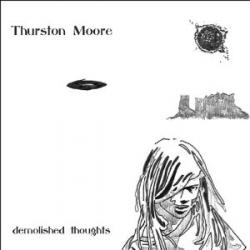 If one were to freely associate a few words with Thurston Moore, phrases like “technical,” “experimental,” or “Sweet Lord, did I just listen to 10 minutes of feedback?” might come to mind. Moore has always seemed to have a certain aloofness in his approach to his music, the results often being something beautiful, at times clinical and cold. His fourth album, Demolished Thoughts, released on May 24th (Matador Records) is an absolutely stunning deviation from his usual aesthetic. His soft, pink underbelly is revealed, and the unexpected warmth and intimacy make for a spectacular listening experience. ‘Atmospheric’ might be an apt descriptor for this album: Moore creates an atmosphere with sound, but it’s a highly accessible one. For once, it feels as though he actively invites his listeners into this space, instead of simply allowing them to observe from its borders.

According to the Matador website, the album was written over a two-year period and recorded over fall of 2010 / winter of 2011 at Beck’s Los Angeles studio, as well as in Northampton, Mass. Beck’s influence is unmistakable here, as it has a very similar orchestration and tone to that of Sea Change. The result is an organic confluence of tracks, and a continuity of sound that one would not necessarily expect from either artist. Moore’s hallmark dissonance, distortion, and feedback are nearly non-existent on this album, and despite a somewhat brief 45-minute length, it undulates slowly with a natural drama. It is not overwrought or artificial. It is simply beautiful music.

Moore’s use of violins and harps adds a textural element that is both subtle and clever, softening or crispening a track as needed. He has used violinist Samara Lubelski on other albums with stellar results. The addition of harpist for Kurt Vile, Mary Lattimore, was an excellent compliment, and the sound produced would almost seem to suggest they had been working together for years. Of the two musicians, Moore said: “Beck and I discussed many players we thought would compliment the record in all its improvisatory experimentation and focus on song-slip. We decided that Samara Lubelski (violin) and Mary Lattimore (harpist) had to play and we invited them to join us. We fed them cantaloupes, raw milks, doughnuts, Zuma sushi and Lily’s fish tacos. And we threw shadows into the sun.”

There is no more perfect summation as to what occurred as a result of this collaboration, as this is exactly what the album sounds like. Moore’s vocals take on an almost J Mascis-like quality: soft, sweet, and low. At times, though there is warmth and brightness in the music, an element of tragedy seems to be lurking around the corner in his regular use of minor chords. The tracks are staggered well throughout the album with regard to both sound and tone. The first track, “Benediction,” has is dreamy and hypnotic, and the combination of strings and guitar plus Moore’s subdued voice sets a romantic kind of tone. There are moments, like those in tracks like “Mina Loy” (a perfect song topic for Moore), with its chilling Mexican showdown whistle, where the sound becomes paradoxically calming and menacing at the same time. Illuminine has the sleepy electricity of a first kiss. “Circulation” is a bit crunchier, and is more of a return to Moore’s default setting, and features more orchestral swells, somewhat reminiscent of Smashing Pumpkin’s “Disarm.” Perhaps the finest track on the album, however, is “Blood Never Lies.” The combination of female accompaniment and strings elevates and brings a gentle, tender sweetness to it that allows for infinite replay and lovesick sighing. “Orchard Street” again transitions back to a more traditional sound from Moore, but does not destroy flow of album, but rather accentuates it, similar to a lighter version of something like Sonic Youth’s “Peace Attack.” Thematically, words and concepts like circulation, blood, rain, and, transition all lend themselves to the overall fluidity of the album and perhaps to Moore’s approach to its creation.

Demolished Thoughts is nearly impossible to describe. Though this is a departure from the status quo for Moore, he is still, at his core, very true to himself and his sound as an artist. Robert Palmer, rest his soul, was absolutely right — “Trying to describe something musical is like dancing to architecture, it’s really difficult.” Add the ripple of it being a Thurston Moore album and it’s more like painting to quantum physics.