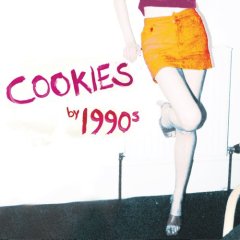 Glasgow’s 1990s (that’s 1990s, not 1990’s, not The 1990s) should be commended for the effort they’ve put into trying to make a good rock ‘n roll album. On principle alone, all the necessary parts are in place: crunchy guitar chords, vocals that come in somewhere between singing and talking, melodic bass lines, and a tom-heavy drumbeat. Cookies could be the quintessential rock album – only it’s not.

I can’t quite put my finger on what’s not to like about the songs, but part of it is likely the vocal delivery from lead singer John McKeown (formerly of Yummy Fur, also known as the band that preceded those other Scots Franz Ferdinand). His vocals are oddly phrased and seem to go high into the ether for no discernible reason; not surprisingly, think Franz Ferdinand lead singer Alex Kapranos but with less of that weird British charm. While the band hasn’t succeeded in writing an album that’s really very memorable or impressive at all, they should get props for at least being catchy, and for bucking the indie rock genre that’s become so popular these days. These guys try to play complete balls-out rock ‘n roll – with a definite nod to The Rolling Stones – and have a ton of fun doing it. And if you’re a fan of that kind of thing, you’ll probably dig this album.

There are some lyrics that will get stuck in your head after two or three listens, like the background refrain of “you made me” from the album’s opener “You Made Me Like It,” or the ba-bas that start off “See You At The Lights.” The best song on Cookies is the square peg in a round hole, “Arcade Precinct.” The band trades in an acoustic guitar for the normally distorted electric guitar chords and ends up with a lovely three-minute Britpop gem that recalls fellow Brits The Kooks. “Arcade Precinct” is proof that the band has a good sense of melody, as well as the potential to write really good pop songs, but they just tend to ignore it on most of the rest of the album.

1990s may have the coolest band name you never thought of, but Cookies is just a collection of mildly interesting, temperate rock songs.