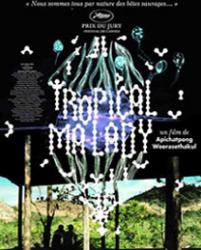 A look back at the gayest, most mysterious cinema year ever

Tropical Malady, my favorite film of the year, if not the (young) century, tells a very similar gay-on-the-surface story with its own pair of unlikely lovers and a completely different enchanted wilderness. Apichatpong Weerasethakul‘s audacious and painfully lovely film baffled me when I first encountered it at SIFF, but it quietly followed me home from the Harvard Exit that balmy night and has lived with me ever since. In the words of another critic: “Just as the crags and bluffs of Brokeback swallow up its star-crossed lovers, at once creating and destroying for them a false Eden, the Thai jungle to which Malady‘s young men retreat becomes both an erotic sanctuary and a literal fantasy world.”

Malady and Brokeback were two of many “gay” titles in a very gay movie year: Capote, Garçon Stupide, Mysterious Skin and Transamerica were also among my favorites. As were a new postmod tech-generation Wizard of Oz, a fierce allegorical tale of post-9/11 America, and three vignette-form flicks about life in LaLa Land. My list:

1. TROPICAL MALADY
When you see the film — and have I gotten across that you really must? — pay close attention to things that may seem out-of-place in the early scenes: what the soldiers find in that seemingly endless field; the enigmatic naked man walking down a lonely road; offhand dinner-hour conversations about a corpse’s transient ghost. Perhaps they’ll make sense later, after Tropical Malady literally ruptures at midpoint. review

2. A HISTORY OF VIOLENCE
Director David Cronenberg gives us a tough, sobering, not-so-subtle antiwar fable that slyly impersonates neo-noir. Said another critic: “A History of Violence does for the thriller what Todd Haynes’s Far From Heaven did for the melodrama, placing everything in quotation marks while still taking the characters’ dilemmas seriously.” imdb

3. JUNEBUG
If you’ve only read about Junebug in relation to Amy Adams‘ fantastic performance as a pregnant country naïf, you know but one of the film’s many wonders. Embeth Davidtz is brilliant as a world-savvy Chicago art dealer who travels to rural North Carolina with a dual agenda: to meet her (hot) husband’s family (including the aforementioned preggie Adams) and to pursue the work of an eccentric folk artist. Seems simple enough, but beautiful handling of the minutest details, and truly uncanny red-state authenticity, make me keen to predict great things ahead for director Phil Morrison. One doesn’t have to be from the South to fully appreciate Junebug, but it sure don’t hurt. imdb

4. GOOD NIGHT, AND GOOD LUCK.
George Clooney‘s second directorial effort is a thrilling and beautifully-executed chronicle of the pre-infotainment “golden age” of television news, when networks refused to be swayed by government and corporate interests, and reporting was actually about the truth. David Strathairn is a revelation as the legendary Edward R. Murrow; his subtly ferocious self-certainty makes for one of the best performances of the year. review

6. MYSTERIOUS SKIN
Fabulously surprising film that handles its delicate-to-say-the-least subject matter (child sexual abuse) with audacious originality and grace. Joseph Gordon-Levitt is sinewy-licious as a small-town hustler who winds up in tough New York; his past shares a dark secret with that of Brady Corbett, equally good as the haunted, dorky-cute former childhood friend. This is a beautiful, wrenching, unforgettable bit of cinema, and a career best for indie auteur Gregg Araki. review

7. TRANSAMERICA
Yes, desperate housewife Felicity Huffman gives one of the year’s bravest performances as a male-to-female transsexual who learns she fathered a now-teenaged son. But once you’re over the casting you’re left with the best road movie of the year, and then you realize what a truthful and profound piece of Americana Duncan Tucker‘s debut feature really is. imdb

8. YES
Always-fabulous Joan Allen plays a London-dwelling Irish-American in an unfulfilling open marriage; she takes on a sexy Middle-Eastern lover (Simon Abkarian) who brings about (among other things) some sobering post-9/11 life realizations. A gloriously unique film, with Shakespearean iambic-verse dialogue by writer/director Sally Potter that is marvelous and wise in ways few of today’s auteurs aspire to. review

9. NOBODY KNOWS
Inspired by actual events occurring in late-’80s Tokyo, and shot in chronological order over more than a year, this story of a mother’s ultimate neglect of her four children worked its way under my skin like nothing since… well, Tropical Malady. I saw Hirokazu Kore-eda‘s masterful film early in the year, and it’s still one of the most affecting and horrific pieces of cinema in recent memory. review

10. MIRRORMASK
This high-tech British take o
n Oz barely made a splash stateside, but it will be considered a classic someday. Cult multimedia artist Dave McKean collaborated with Sandman mastermind Neil Gaiman to create a psychedelic dream of a coming-of-age story. Surprisingly wise and visually mindblowing, its most deliciously fucked-up rendition of The Carpenters’ “Close to You” was the coolest thing I saw on screen all damn year. imdb

DRAGNET GIRL
I just don’t know what else to do with the loving fascination I have for Jasujiro Ozu‘s 1933 silent flick, so here’s a special shout-out. Like many of Ozu’s films, Dragnet Girl is an overlooked masterpiece, but I was lucky enough to catch it at Northwest Film Forum‘s most excellent retrospective of the auteur’s existing work early in 2005. The storyline is typical noir (a small-time ringleader finds himself torn between the affections of a vamp-with-a-secret and an innocent maiden), and with the film Ozu worked many conventions we’ve since come to think of as “Hollywood” — romance, gangster thriller, and melodrama are in the mix — long before they saw their Western heydays. Dragnet Girl is a delicious melding of style and symbol; when coupled with an astonishing live score (by John Atkins of 764-HERO), it was cinematic bliss.