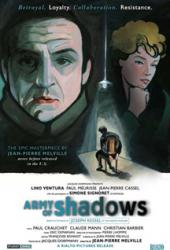 Golden Globes have been awarded (I guess I’m OK with Babel, but I still can’t believe Bobby was even in the running), Oscar nominations will be announced next week (I’ve a feeling the fun-but-flawed Dreamgirls will be up for Best Picture), and as we enter late January I’m probably the last major American film critic (hee) to post a best-of list.

But I’ve been busy, and ’06 deserves a bit more than a haiku intro.

Because it was a damn interesting year in cinema.

Case in point: my favorite film of the year was Army of Shadows, a Jean-Pierre Melville masterpiece that was actually produced in 1969 but never reached American theaters until last spring. The story takes place in 1942, against the backdrop of the Nazi occupation of France, but its universal truths — the essential ambiguousness of ethics-based struggle, the emotional erosion of countries at war — speak volumes about this very moment in our own time.

History repeating itself (or us repeating history) defined the 2006 movie year, as did themes of embattled nations and organized resistance to regime corruption; they occurred simultaneously in stories about the past (Army of Shadows, Pan’s Labyrinth, Catch a Fire, The Last King of Scotland, Flags of our Fathers and its superior companion piece Letters from Iwo Jima), the present (documentaries Iraq in Fragments and My Country, My Country), and the future (Children of Men). If movies are our collective dreams, we’re living in truly nightmarish times.

1. ARMY OF SHADOWS
I loved many movies in 2006, but I was in awe of only one. Lino Ventura leads an utterly parfait cast as the commander of a small cell of 1942 French Resistance fighters in Lyons and Paris; the film follows the group as it carries out a series of patriotic (and potentially deadly) missions. To behold Army of Shadows is to be held in suspense and wonder, and gradually to discover an elegant internal monologue in the guise of a war flick; it becomes a riveting, moody, almost meditative piece that you never want to end. The great Jean-Pierre Melville made ravishing and unconventional films with a precision of image and movement that remains unmatched in cinema history; thankfully stateside audiences are finally discovering the classic work of this classic director. This is the film of the year because it’s in a class all its own, serving as a faultless introduction to Melville’s astonishing gifts. imdb

2. PAN’S LABYRINTH
There’s a different Resistance at work (against Franco’s forces circa 1944) in this sumptuously dark fairy tale by Mexican director Guillermo del Toro. Heroine Ofelia (fantastic 12-year-old Ivana Baquero) is a fascinating concoction of girlhood with equal dashes of Alice, Dorothy, and Buffy. We meet her as she takes up rural-Spain residence with her pregnant mom and new stepdad (Sergi López)… who happens to be an vicious, fascist army captain with a penchant for squeaky leather. As Ofelia withdraws into a fairyland realm (and, really, who can blame her, even if it is all in her head?) there are gothic twists aplenty, frequently harsh and always spellbinding, peppered with fantasy bits so visually stunning that you may never look at “real life” the same way again. imdb

3. THE QUEEN
In the opening shots of Stephen Frears’ wonderful biopic, Helen Mirren turns to face the camera and dares you not to believe that she simply is Queen Elizabeth II. She’s a marvel, and she deserves every award she’s sure to receive for her portrayal. Britain’s class struggle (compare and contrast Tony Blair with Prince Philip), noblesse oblige (Liz is really convinced that not mentioning Diana’s death is the right thing), and private people suffering through public roles (I’ll never forget the beautiful deer-in-the-Highlands scene) are explored effectually as Mirren dazzles and delights. imdb

4. LETTERS FROM IWO JIMA
Director Clint Eastwood does amazing things with film genres: Unforgiven deconstructed the Western, Million Dollar Baby was a boxing flick until it became an elegiac meditation on life and loyalty. In 2006 he gave us pair of WWII-set war movies: the very American Flags of Our Fathers (a runner-up on this list) and its superior Japanese counterpart Letters from Iwo Jima. Flags and its spin-on-patriotism message are very good, but Letters is great: bleak, beautiful, and shamelessly antiwar, with an unabashedly emotional centerpiece scene that puts tears in my eyes as I think about it even now. imdb

5. IRAQ IN FRAGMENTS | MY COUNTRY, MY COUNTRY (tie)
The two best documentaries of 2006 (a year full of great non-fic offerings) offer fascinating viewpoints of contemporary Iraqis. Local filmmaker James Longley’s marvelously-photographed Iraq in Fragments is an impressionistic, poetic three-part portrait of a country divided; its stories are always lovely, even when its settings are decidedly not. Laura Poitras’ My Country, My Country follows a Sunni physician and his family as he prepares to run for office in the 2005 parliamentary election; like Flags of Our Fathers, it depicts wartime perception-management in a bitterly truthful light. Iraq imdb | Country imdb

6. CACHÉ
Two of France’s most compelling actors (Juliette Binoche and Daniel Auteuil) in a film by one of the country’s most provocative directors (Michael Haneke) that actually exceeded, and redefined, my expectations. This brutal domestic nightmare has Hitchcockian voyeurism aplenty, and is essentially about terrorism against bourgeois complacency; unlike last year’s A History of Violence, however, Caché (Hidden) keeps far more secrets than it reveals. imdb

7. CHILDREN OF MEN
Gifted and prolific Alfonso Cuarón gave us the disparate Y Tu Mamá También and Harry Potter and the Prizoner of Azkaban. Now he’s made an excellent sci-fi thriller, and the 2027 world-gone-mad of Children of Men is uncomfortably similar to our own. Clive Owen and Julianne Moore are fantastic (as usual) as members of yet another Resistance, protecting the world’s sole pregnant woman (the first in 18 years). At once grim and exhilarating, it’s the most imaginative cautionary tale of recent years. imdb

8. THE DEATH OF MR. LAZARESCU
Speaking of grim, this knockout film by Romanian Cristi Puiu shows us one hellish night (in seeming real-time) in the life of the drunken, ailing title character (Ion Fiscuteanu) as he seeks urgent medical care in Buchar
est. It’s unrelenting, well observed, and extremely moving, with brilliantly naturalistic performances by Fiscuteanu and Luminita Gheorghiu as the longsuffering (though far from heroic) paramedic assigned to his case. review

9. L’ENFANT | LITTLE CHILDREN (tie)
The adults are the children in these two familial-discord films by emerging masters. Belgian brothers Jean-Pierre and Luc Dardenne’s raw and realistic L’Enfant (The Child) takes a hard look at the arrested adolescence of young parents living on the fringes of society. Stateside, Todd Field follows up In the Bedroom with the equally brilliant Little Children, in which the intersections of suburban parents Kate Winslet and Patrick Wilson move outside the playground and town pool… and into their respective homes. L’Enfant imdb | Little imdb

10. DUCK SEASON
This Mexican indie gem tells a simple story — two early-teen boys have a lazy Sunday, interrupted by a blunt neighbor girl and a pizza guy who just won’t leave — and it’s captured with ageless beauty and loopy humor by first-time feature director Fernando Eimbcke. I saw it early in ‘06, and have thought of it nearly every day since. (Good movie year for Mexican directors, ¿no?) review

non-fiction: 49up, 51 Birch Street, The Beales of Grey Gardens, Dave Chappelle’s Block Party, Deliver Us From Evil, The Devil and Daniel Johnston, The Heart of the Game, Jesus Camp, Once in a Lifetime, Regular or Super: Views on Mies van der Rohe, Shakespeare Behind Bars, Shut up and Sing, Street Fight, This Film is Not Yet Rated, TV Party, Who Killed the Electric Car?, The World According to Sesame Street