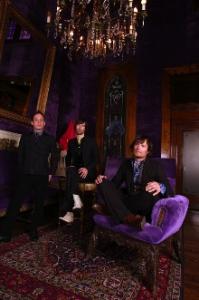 Jason Bell of Stars of Track and Field

{Imaginary writer Diana is a *huge* Stars of Track and Field fan — and who can blame her? We've been following the Portland trio for years, especially since their debut EP You Came Here for Sunset Last Year placed in the Top 5 in our Top Northwest Releases of 2005 Readers' Poll.

The band has since signed to Wind Up Records (home to Evanescence and Creed {!}), and officially released the full-length Centuries Before Love and War this week. Frontman Jason Bell took some time from his busy rock and roll schedule to answer a few questions for Three Imaginary Girls. Thanks Jason, and congrats!}

Three of the five tracks from You Came Here For Sunset Last Year made the cut for your debut album. How did you decide to include the songs you did? Why did you decide to leave out "Let Ken Green" and "Foreign Snow"?

The songs that were included for the album — "With You," "Arithmatik," and "Say Hello" — were selected simply by the three of us voting. We felt they were in line most with the other songs, and since we didn't have the budget to record all new songs, we decided on those three to complete the theme of Centuries Before Love And War.

Where do you get your ideas for lyrics? Are they usually personal or do you ever make up characters?

I really have no idea where my lyrics come from. Moreover, I really don't want to know. I usually write the music first and begin writing lyrics based on whatever emotion the progression brings out of me.

On a related note, and mostly out of sheer curiosity, who is Ken Green?

A few years back I was at an estate sale in Portland, OR, and found this cool old tape recorder, very early. Ya know, like early eighties elementary school kind of thing. I noticed a cassette tape inside and immediately bought the thing. When I got it home, I freaked. The voice identified itself as Ken Green. He was an elderly man who would make these tapes talking about his daily life or recording conversations with friends. The voice over sample on the song "Let Ken Green" comes right from that tape.

For a studio recording, Centuries Before Love And War has a very huge and present feel to it and sounds as though it could have been recorded live. Why is this? How did you achieve that in the studio?

That's cool you think it sounds that way. Trying to make something raw and polished is a contradiction in terms, but of course that was what we tried to do. A lot has to do with the production and engineering by both Tony Lash and Jeff Stuart Saltzman. Using weird mics and filter passes to degrade tones. Trying to pair big sounds with small tones. The whole record seems to be a contradiction. Vintage, modern, acoustic drums, drum machines etc.

When I saw you perform, I noticed that you have some bass lines programmed in digitally with the drums. What do you feel the advantages are of simultaneously lacking a bassist and essentially having two drummers? Would you ever consider including a bassist?

In fact we sequence all our bass lines. The most obvious advantage is not having to tell a bassist to stop soloing. Just kidding, but keeping the opinions limited to three artists is a real advantage for this particular group. I would definitely be into a bassist at some point. I feel like when the time is right, we will expand by multiple members, not just a bassist. As it stands now, each of us has a ton of responsibility and relaxing the workload on stage would free us up and allow us to entertain the crowd and ourselves a bit more. We recently had our friend Jeff Klein play with us at Doug Fir in Portland for New Year's Eve and it was great watching Kevin have the freedom to command the stage as a singer/front man instead of having to continually play an instrument. Plus he has mad dance moves.

Is the songwriting process pretty collaborative or does one person bring in most of the music and lyrics?

Kevin and I write the music and lyrics. We generally alternate, which kind of happens naturally. While the band is working on say my new song, Kevin will be finishing his new song to be ready for the group when mine is done and vice a versa. Once the music and lyrics are completed, one of us will bring the song to the band and the three of us hash it out from there. However, Dan writes nearly all the programming and most of the bass lines plus his drum parts. All three of us work on the arrangements together.

Were any specific songs easier or more difficult to finish?

"Lullaby for a G.I." was the most laborious. It originally had this really huge chorus with big guitars etc. But it just pissed me off. Sounded too lunk headed. I decided it should be mellow and Dan rallied the mad programming and Kevin wrote the bridge both in the studio which saved the song from the dustbin.

I've read that besides the themes of loss, Centuries has a lot to do with the current war – what was your original purpose in writing these songs? Was it meant to be a sort of concept album?

The "concept" thing happened in a peculiar way. When we started thinking about what songs to include for the record, Kevin and I took a look at what we were writing and realized there were these three dominant themes, the cost of war, love lost and maligned memory. So when finishing up the last songs for the record we took that into account and realized that Centuries Before Love And War encapsulated a message we felt needed to be communicated. It is rare to have two songwriters in one band and I think more rare that our themes are so similar on this record.

What, if anything, was your biggest concern about releasing Centuries, in terms of critical reception? Did you ever worry about it not being "mainstream" enough for the mainstream critics, or was that never really a concern for you?

Unfortunately, I tend to worry about what the "hipster" crowd thinks. A habit I'm desperately trying to break. So far we have garnered great reviews from Billboard and Amplifier as well as cool indie publications that the band actually reads like yours. Now that we have been touring a lot and meeting so many different kinds of musicians I'm trying to step out of my shell, there is just too much cool music that doesn't get a chance in that hipster scene because it doesn't meet these strict guidelines of underground or cool music. Time to stop being so painfully self-aware.

Centuries was recently named VH1.com's Must Hear Album; you've been interviewed for Gothamist, and written about in Amplifier Magazine. How do you feel about all the attention that the band has garnered in 2006 in the wake of You Came Here For Sunset? Has it changed anything within the band, or about your musical or artistic goals?

Well the private plane, gobs of blow and supermodels have been nice. Really, I think we naturally have adjusted our ambitions accordingly. When we started the group and released the EP. We thought it would be fucking great to get some good press and some good shows. Thankfully, Dana and the ladies at Three Imaginary Girls were one of the first important music sites to actually listen to the songs and praise them publicly. Then we thought it would be cool to get a deal and make a record. Well, we got two deals and so on and so forth. I think we are learning how to appreciate our limited success so
far and not get caught up with the "next step" while also trying to play to bigger crowds and write better songs.

It's probably safe to say that the band has set a very melancholy course for itself – do you think this will continue in your next release? How do you feel about being labeled melancholic or sad?

I wouldn't say that we are sad people, but our music sometimes comes across that way. The pairing of anthemic major chords with downtrodden melody and lyrics has always interested me. It's so bittersweet and introspective. Maybe it's the weather? I would like our next record to present something more raw and personal. Strip down the production. For my own part, start writing lyrics that are a bit more literal. I have always written in metaphor, setting moods instead of describing personal events. I'm feeling myself needing to be a bit more personal and let people in a bit more.

Who would you list as your top five musical influences?

I am too far in the forest to see the trees on this question… so how about I list the top five artists that are inspiring me right now: Andrew Bird, Jeff Klein, Robert Altman, Anna Maj Michelson and Willie Nelson.

The band is named after a Belle and Sebastian song, but sounds nothing like them. Is there anything of their influence in the way that you think about the songwriting process?

Not really. They are a great band and hope they appreciate the homage and don't think we are bunch of wankers. But as you know music is riddled with bands taking their name from songs of other artists.

You toured in support of Jeremy Enigk in 2006, and there is a hint of Sunny Day Real Estate in older songs like "Movement," from your 2003 self-titled release. There's also a lot of heavy but sparse guitar work on Centuries with big drums — was the band ever influenced by the old wave of emo bands like Sunny Day, Christie Front Drive, or any of the others?

No. I had never heard a Sunny Day song until we heard we were going out with Jeremy and I downloaded a few. I know that's total sacrilege in the Northwest, but there is a whole period of my life where I didn't listen to music and focused on my painting. Once we toured with him, I couldn't stop listening to Return of the Frog Queen. Of course 10 years after he released it, but what an amazing record.

What, if anything, has changed about you guys as a band and as musicians between the release of You Came Here for Sunset and Centuries?

We are lucky enough to not have day jobs for the time being. It has been really awesome to just work on music. It is also a bit nerve wracking. I want to do this as my job forever but that is just so unrealistic.

Which song do you think best sums up the album, and why?

I think the first song "Centuries." It's lyrically haunting, has intricate programming and a big, epic end to it — kind of like great sex. I wish I could claim I wrote it, but Kevin did and I will hate him forever for it.