A history book by local authors about music created in the Pacific Northwest? Of course I was going to read to 26 Songs in 30 Days: Woody Guthrie’s Columbia River Songs and the Planned Promised Land in the Pacific Northwest by Greg Vandy and Daniel Person, and of course I was going to like it. It almost didn’t matter to me if the book was well-researched and well-written. Fortunately for everyone else, it is both of those things, and makes a very specialized topic not only broadly accessible, but interesting to an audience that may not be remotely invested its subject.

Like a lot of indie music fans, I knew that Guthrie was important (without Woody Guthrie, there would be no The Head and the Heart, no Bon Iver, no banjos in pop music) but I didn’t really know anything about him or his music beyond “This Land is Your Land.”

Now 26 Songs in 30 Days is not intended to be an introduction to Woody Guthrie. Like a good folk song, the book tells a story. The text so perfectly captured Vandy’s voice, I could almost hear him reading the words, as if each chapter was providing context for the next song on his KEXP Roadhouse radio show. He tells the story of the time Guthrie lived in the Pacific Northwest with a contract to write songs for the Bonneville Power Administration’s PR office. As you may have guessed, Guthrie wrote 26 songs for the BPA. The songs, which all connect in some way to construction of the Grand Coulee Dam, form what is known as his Columbia River Cycle and contain some of his best and most famous work.

Although 26 Songs in 30 Days is neither a comprehensive biography or a history of folk music, it does partially fulfill those functions, as it is necessary to know something about Guthrie’s life and the context in which he worked to understand the importance of the Columbia River songs. This is where co-author Daniel Person’s expertise as a Seattle Weekly editor showed through, weaving in rigorously researched historical context that made sense out of populist Guthrie’s willingness to pull a government paycheck writing propaganda for a giant public infrastructure project. Together, Vandy and Person provide an eye-opening view of America before it’s red-scare hysteria, where progressive politics were tightly linked to the Communist party. In fact, the greatest achievement of the book may be the ways that it wraps a personal story around the role of government in electricity production; 26 Songs in 30 Days honors a wandering Okie and humanizes the politics of infrastructure at the same time. 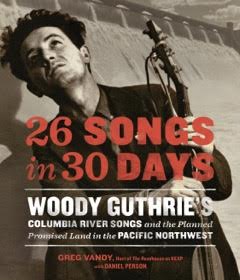 The book is available on Kindle, but I’d recommend the hardback in this case. Not only is it a natural collectible for serious Guthrie fans, but it has a satisfying substance as an artifact. It’s printed on heavy paper, with hand drawn maps of Washington state on the endpapers. The book is littered with historical photos and Guthrie’s own handwritten lyric sheets, giving it a little bit of the feel of a scrapbook.

Like the people’s poet himself, author Greg Vandy is criss-crossing Washington state is support of his own 26 Songs project. Coming up in the next week there are some special events where you can get your book signed or buy a signed copy directly from Vandy. But be quick, or he will run out of books before you get there. 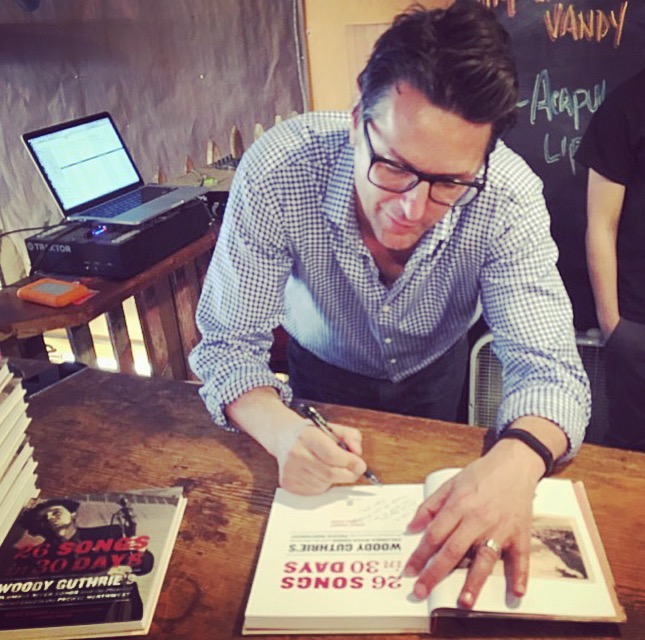 The celebration starts at noon with live in-studio performances of some of the Columbia River songs, hosted by DJ Cheryl Waters. At 3 pm, DJ Kevin Cole with interview Vandy on-air. Then from 6 pm to 9 pm, Vandy will host a special Columbia River Songs edition of his Roadhouse radio show, with exclusive interviews and audio rarities.
Thursday May 26th: A Tribute To Woody Guthrie & His Month of Song – {Sold Out!}
If you work downtown, stick around for this tribute concert at Benaroya Hall. Performers include John Doe from X, Dave Alvin, Bill Frissell, Shelby Earle, Sera Cahoone, Ian Moore, and others. Vandy will be speaking and signing books.

Saturday May 28th: Woody Guthrie Day At Grand Coulee Dam
Why not take an Eastern Washington road trip this Memorial Day weekend? In the first act of government recognition for Guthrie’s work, the governor has proclaimed May 28th Woody Guthrie Day. There’s a big shindig planned at Grand Coulee Dam. Vandy says, “This is a free event for families at the dam site in Grand Coulee. Music on the lawn in front of the dam, talking heads and film screenings inside the visitor center.” Vandy will be reading, appearing on panels, and selling books while visitors picnic, enjoy the view, and see what all the dam fuss is about.

Monday May 30th: Folklife at Seattle Center
The Columbia River songs were commissioned to be the soundtrack for a documentary. Things didn’t go as planned, but it makes sense to start with a screening of Columbia: America’s Greatest Power Stream at the SIFF Film Center. Vandy will host the 1 pm screening on Monday. He’ll be selling and signing a limited supply of books, too. Then at 3 pm, he will host a live performance showcase of Columbia River songs on the Fisher Green Stage.

If you can’t make it out to one of these events, you can still pick up a copy of 26 Songs in 30 Days on Amazon.