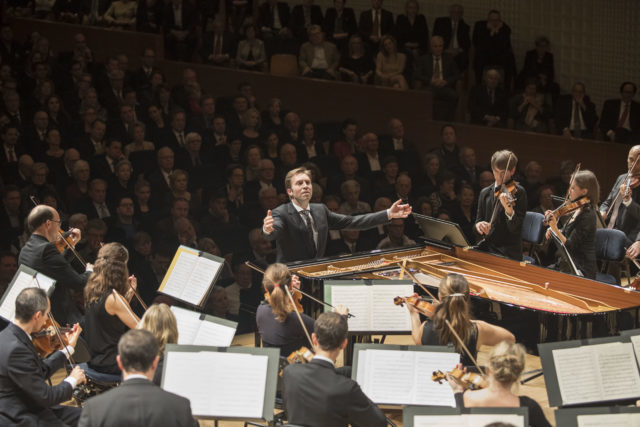 Ludwig van Beethoven, in his early career, was far better known as a pianist than as a composer. He began performing when he was around 7, and by the time he was in his early 20s he’d established himself as a skilled improviser in Vienna, a town that at the time was like Hollywood for musicians: if you had talent and/or ambition, that was where you went with your bus ticket and handful of francs to make your name. Gradually, as his hearing began to fail, he was forced to give up performing and concentrate entirely on composing, and among his other extraordinary work, he wrote five piano concertos.

In 2000, Norwegian pianist Leif Ove Andsnes decided to tackle performing all five, in the order written. (That means he did the Second first, since it was written first but published second, savvy?) It took him 4 years with the Mahler Symphony, and though strictly speaking Concerto: A Beethoven Journey is a documentary about this undertaking, it feels far less like a journey than a meditation, an opportunity for Andsnes to reflect on what he discovered about the work as he played it and envelop us in his discoveries.

Three threads intertwine in the film: Andsnes’ narrative reflections, concert footage of his performances, and a voice-over of some of Beethoven’s salient letters. The first gets the most play at the beginning, and so the film at first feels like it may be a vanity piece—Andsnes isn’t the world’s most charismatic fellow when talking about his own history. He started playing young, had a series of mullets, got serious about playing in his teens, yada yada yada, here we are. Things pick up as he works his way into the pieces. The Second Piano Concerto, he argues, is “Beethoven, right from the start.” He points out the wit and humor in the work, and begins highlighting particular delights. At first, many of his insights are technical. He demonstrates sequences that Beethoven would have written to showcase his prowess at the keyboard, and others that demonstrate his intellectual mastery of technique. Then, gradually, Andsnes’ insights grow more emotional, more psychological, and harmonize beautifully with the increasing emotional depth and complexity of the pieces themselves. Excerpts from Beethoven’s letters deepen the atmosphere.

Whether Andnses’ interpretations are strictly precise is irrelevant. What they do is complement the emotional resonance of his performances and the pieces. Andnses, guided by director Phil Grabsky and polished by editor Rick Aplan, bring something delicate and unexpected to the work, laying new pathways to experience work that is already sublimely moving on its own.