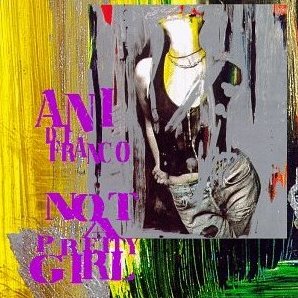 I’ve come to find that there are very few things on my iPod anymore that really shock my friends when it comes up if we’re driving around or the like. However, this is an exception. No one expects Ani Difranco, really, just like some sort of punk-rock-haired Spanish Inquisition, at least not on Erik’s iPod. What is he doing listening to such feminist singer-songwriter music? Is he headed to Lilith Fair now? Will he fall asleep weeping to Sarah McLachlan this evening? I have no real good reason for having “32 Flavors” on my iPod other than for the fact that, well, I just like the song. That being said, it does comprise nearly 50% of my Difranco collection (the other half being “Little Plastic Castles – the song, not the album).

I can’t really put my finger on why I like “32 Flavors” so much – heck, it is close to one of the few songs on my iPod that I don’t skip when it comes up on shuffle. There is just something oddly soothing and rebellious about the whole affair and it seems to be Ani trying her best to do what she does best: write biting lyrical commentary and set it to mostly pleasant music. “32 Flavors” does have a bit of a Peter Gabriel Unplugged feel, especially towards the end where it goes all “Secret World Live” on our collective asses, but that puts it even more in the Erik column (yes, Erik has seen Peter Gabriel live back in the day). I suppose “32 Flavors” can just be chalked up as a song with “intangibles” – it has skills that are not definable by any known metric – and although it seems incongruous in my collection, it, at the same time, sounds perfectly at home. I suppose this is really what makes music so fascinating, eh?

(By the way, the iPod Roulette will become a Monday-Wednesday-Friday feature for a while.)