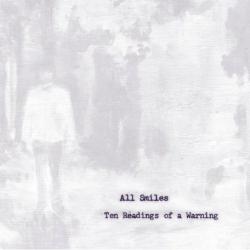 Ten Readings of a Warning

I think that if John Denver had been in his late twenties right about now his album would have sounded a lot like this.

There is something about track four, "Pile of Burning Leaves," that reminds me of "Country Road." Fairchild’s soft breathy voice is definitely not a John Denver belt out by any stretch of the imagination, but still the homespun tales he tell remind one of camp fires and cook outs.

As a whole, Ten Readings of a Warning grows on you a bit like all singer songwriter albums usually do. There is a sweet, tempered grace to the songwriting that is enhanced by a witty repartee between Fairchild and his guitar. The chorus on "Moth In A Cloud of Smoke" is especially nice, breaking Fairchild out of his strumming to give us full body show.

"I Know Its Wrong" takes a crack at the piano, while megaphone vocals and stomping drums drift in alternating soft and loud stanzas. I can see this as being a crowd pleaser live, and quite possibly is the best underdog song of the album.

Judging by the sleeper success of Peter, Bjorn and John’s Young Folks, as well as pretty much any song with non lyrical noise making choruses (which I predict is well lauded due to its ease of sing along when inebriated) Summer Stay has the potential to be DIY single hit.