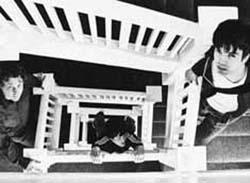 The loss of Seattle's own Aveo was one of the great tragedies of the indie rock world. The echoing, slightly incoherent vocals of lead singer William Wilson have long sung the anthems of my childhood, since the release of their first album Bridge to the Northern Lights in 2001. It was my sister's first year of college, and she brought back Aveo (among other Seattle greats like Aqueduct and Death Cab for Cutie) from the mysterious and inexplicably hip land of expensive liberal arts schools. At the tender age of eleven I worshipped the ground my sister walked on, and we spent summers in our backyard blasting Aveo and upsetting our stodgy suburban neighbors. Now we're both old and my sister is half a world away, but this old song which played throughout my youth has gained some new meaning.

"The Insomnia Waltz" is a haunting lullaby that any Imaginary momma might consider singing to their babe, if they don't mind some slightly creepy lyrics in the first couple stanzas. But it's the latter half of the song that stirs some nostalgia in me, and makes me miss my older sister more than ever.

"Somewhere in this whole universe there's a sister
For me, may she find me inside a twister

When my sister returns from her years in the Peace Corps, I know we will again be blasting our too-loud music for some new stuffy neighbors to find distasteful. And I'll feel very badly for Aveo who seem to long for a sister to take care of them; mine will at last be home again.