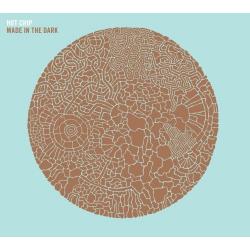 Made in the Dark

If we were to compare Hot Chip’s Made in the Dark to their 2006 album, The Warning, in, let’s say, military terms, it would be something like calling the latter a sniper on the rooftop covertly picking off baddies while the former is a strike-force of a dozen B-52s with enough tactical weaponry to return the offending country to the stone age. If that analogy doesn’t float your boat, maybe think of The Warning as a tap on the shoulder to get your attention and Made in the Dark as a crowbar in the kneecap to do the same thing. Hot Chip has decided to hit us with “Shock & Awe” in 2008, and really, it is fabulous. Sure, it doesn’t have the initial subtlety that made The Warning such a sleeper hit, but maybe it is Hot Chip’s turn to just hit one out (you know, just to add a third manly comparator).

Made in the Dark opens in such a way that you know that Hot Chip wants you to move. In fact, there is a lot about the first quarter of the album that is reminiscent of something like the Chemical Brothers’ Exit Planet Dust and you wonder if Hot Chip didn’t travel backwards through time to snatch the sounds that the Brothers have never been able to recapture.

“Out at the Pictures” is a complete electronic throwdown, like New Order 2.0, ripping the roof off the show. It almost sounds like Hot Chip is so excited you’re listening that they just fire all their guns at once. Before you know it, you’re into “Shake a Fist,” a song that starts off sounding like it could be a nice, gentle number, then suddenly the bottom drops out like a rollercoaster to Hades. “Shake a Fist” is a fierce entry, sick and seductive with howls and grunts (even with the “Sounds of the Studio” breakdown in the middle). “Ready on the Floor” is a brilliant little dance song that is Hot Chip at its apex, mixing the angular beats that start the song into a melodic verse that exists as a testament to the influence of the Pet Shop Boys and New Order on the band. “Hold On” is in the same vein, becoming an unabashed dance anthem.

The wide and variable influences of Hot Chip are always surprising, like “Bendable Poseable,” sounding like a revamped and modernized Prince song that is then counter-programmed with “We’re Looking for a Lot of Love," which takes a page out of the Postal Service playbook. “Touch Too Much” might be the most similar to what we heard on The Warning, finding Alexis Taylor and Joe Goddard’s voices mixing perfectly over the swirling melody.

Of course, it isn’t all roses and sunshine. The title track (along with “Whistle for Will”) is just a so-so ballad, while “One Pure Thought” comes across like new U2 at first (which I know many TIG readers will probably take as a bad thing; I just see it as uninteresting) before morphing into a Madonna song. “Wrestler” is a little awkward, stomping irregularly forward with faux-rapping call-and-response thrown into an electro-gospel attempt. However, the dirge of “In the Privacy of Our Love” works well, having a bit of a Depeche Mode circa Songs of Faith and Devotion feel, wrapping up the album in a muted fashion.

Hot Chip might just be the vanguard of modern British dance-rock, the true heirs to the New Order and Pet Shop Boys throne. They obviously understand the subtleties of the music that many artists miss; focusing on the dancing will only get you so far. Hot Chip takes it to entirely another level, making the dancing just a part of the whole musical experience, as if their songs couldn’t exist without the rhythm, but at the same time the rhythm couldn’t exist without the depth of their sound. Made in the Dark is much more upfront for the band, but that’s just fine, it is still a little masterpiece of pop music.