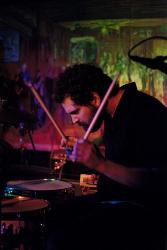 With such an array of amazing live local music spotlighting this past Saturday's calendar, I did what any good photographer-slash-show enthusiast would do: I laced up my running shoes, charged an extra battery, and set out for four performances at three different venues with camera in tow. What a truly awesome night I was able to witness and shoot as a result! Here's how it all went down:

The first stop on Saturday's mini-tour was the Triple Door, for Jon Auer's much anticipated headlining set. With an expanse of well-lit stage at his feet, Auer broadened the selection from Thursday's opening performance at the Fountains of Wayne show with over sixty minutes of beautiful songstry. As he did two nights prior, the Posies / Big Star frontman pulled from a deep catalog of older hits and newer tracks that showcased his masterful songwriting, skilled technique and clear, clean, bell-like vocals — and even took time to treat the crowd with covers of Fountains of Wayne's "Hackensack" and the Beatles' "Blackbird." Gavin Guss provided the perfect compliment to Auer, giving the both Steinway and his lovely vocals a workout for a solid, well-matched opening set, as well as support on a few songs.

With a copy of Auer's Songs from the Year of our Demise (2006) firmly in hand, I bid my goodbyes and hightailed it to Ballard for Pablo Trucker's second-slot set at the Sunset. I arrived side-stage with about fifteen minutes to spare, all warm and glowing and full of show from the Triple Door. A few of our friends from Telekinesis were present for the night's lineup, and I gushed about Pablo Trucker's last performance amidst congratulations about their recent sign to Merge.

Quite literally, there is not enough to be said about Pablo Trucker that I haven't already brought up in prior posts — except for the fact that they're even better than they were last time, which seems near impossible. Their two-man full-force setup managed to simultaneously blow out my eardrums and break my heart in half, with achy lyrics screamed out over a big-bodied electric and the perfect amount of percussion. At one point, the soulful delivery of pure, anguish-infested emoting practically knocked me off my feet. This band is nothing short of an utter triumph, and one to watch for sure. We all stood mouths agape, frequently motioning over the deafening bliss to remind each other that all of this sweetness was coming from two – two – people, who often seemed to share a very consciousness during their extended set.

Amidst shouts of "Thank you! That was brilliant!" and "Thanks for coming!" I headed over to finish out the night with Visqueen. Walking into the sold-out crowd at the Tractor, with a nothing more than a casual knowledge of the band, I could tell immediately that I was in for a treat. Perfectly punky feminine lead vocals and amped-up electric guitars descended over the gleeful crowd that was two songs into the set, and loving every instant of it. It was easy to see why these people were practically bouncing off the walls in reaction to the band — on top of the sheer energy and talent, there was a chemistry between the crowd and the stage that was tangible. And the talent and connection was no song-related fluke — they delivered a truly tremendous set, from start to finish. Had I not been tempted by such amazing music at the other venues I visited Saturday, I would have been front and center for the whole night to see the Tripwires opening, Dept. of Energy second slot, and every minute of the Visqueen set.

And that's not all!

See you around town!