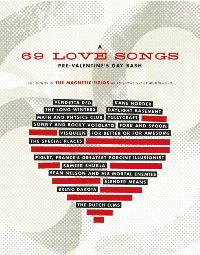 Seattle, WA, January 20, 2006 — "We're Absolutely Cuckoo" for The Magnetic Fields. That's why Three Imaginary Girls has decided to celebrate Valentine's Day this year with a 69 Love Songs Pre-Valentine's Day Bash, co-sponsored by the mighty 90.3 KEXP and the amazing Barsuk Records.

The event will take place at the Crocodile Café on Thursday night, February 9th, and will feature collaborations from tons of Northwest musicians performing their favorite tracks from the 1999 Magnetic Field's 3-disc opus, 69 Love Songs.

The long list of performers includes members of The Long Winters, Vendetta Red, Rocky Votolato, Visqueen, Tullycraft, Harvey Danger, Kane Hodder, and many more. In honor of Valentine's Day, the night will feature three great performance of love — of both the romantic and fraternal nature:

The full roster of performers, with monikers, includes:

The outrageous Adrian Lefleur of Iron Composer fame (coming soon to the Game Show Network) will emcee the event and will raffle off a variety of fabulous indie-rock themed prize packs throughout the night.

"Since Stephin Merritt rarely tours, we figured the next best thing would be to have a bunch of our favorite bands cover the songs. I am giddy with anticipation," said Liz Riley, co-founder of Three Imaginary Girls.

Three Imaginary Girls will also run a "Tell Us Your 69 Love Songs Love Story" themed-contest. Readers can submit their stories of how 69 Love Songs impacted their love lives, and the best submission will receive a pair of free tickets to the show. The imaginary girls will read the best stories between sets throughout the night.

"The crazy thing about 69 Love Songs is that no matter where you are romantically, it's fitting," Dana Bos, also a co-founder. "You can rejoice, court, break-up, kiss, wed, laugh, fight, or drink with that album."

"I can't wait to hear who sings 'Underwear,'" said imaginary girl Char. "I hope he changes the lyrics to 'A pretty imaginary girl, in her underwear.'"

If there's anything better in this world — who cares?

ABOUT KEXP 90.3 FM
KEXP 90.3 FM is a public radio station in Seattle with a mission to enrich people's lives with a unique wide and deep approach to music programming. Knowledgeable hosts hand-pick music including indie rock, world music, blues, jazz, hip hop and electronic from its collection of approximately 500,000 titles. The station also broadcasts more than 250 live performances each year. KEXP programming is also heard on the web at KEXP.org. KEXP 90.3 FM is governed by Friends of KEXP, an independent non-profit organization with an agreement to operate 90.3 FM on behalf of the University of Washington which holds the FCC license.

ABOUT BARSUK RECORDS
Founded in the late '90s by friends and band mates Josh Rosenfeld and Christopher Possanza as a way to put out music by their own band (This Busy Monster) and their friends' bands (including Death Cab for Cutie, Little Champions, Abigail Grush), Barsuk Records has grown and flourished over the years. Focused not on any specific genre, but simply on supporting quality songwriting and unique creativity, Barsuk has helped introduce the world to such phenomenally talented artists as The Long Winters, Jesse Sykes & The Sweet Hereafter, Aqueduct, John Vanderslice, Rilo Kiley, and Nada Surf. Barsuk Records continues to expand its roster into 2006 (with upcoming releases from Rocky Votolato, Mates of State, Starlight Mints and Viva Voce), and promises to be a bastion of quality music for years to come.