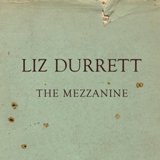 The first thing you will likely say when putting on the latest offering from Georgia's Liz Durrett is "Damn that girl sounds like Chan Marshall!" Sounding a lot like Chan Marshall isn't necessarily a negative thing. Let's face it; Cat Power's Chan Marshall has one of the most distinguishable voices in modern music. And, if your songs can stand on their own — which Liz Durrett's certainly can — then it makes the music worth the listen.

The Mezzanine was recorded and produced by the renowned singer-songwriter Vic Chesnut, who also happens be her favorite uncle. In fact, it was Uncle Vic who purportedly gave Liz her first guitar at sixteen years old, jokingly advising her to "write mean songs about her parents." While Liz has been writing music for over ten years, it wasn't until recently that she actually started putting any recorded music out. According to her bio, she spent nearly nine years away from music. (Too bad, really. Had she stuck with it, she might have beaten Chan Marshall to the punch).

The production on The Mezzanine is much stronger than her prior release (Husk). There are times there is a smidge too much reverb on vocals, but overall Vic has done a fine job of keeping Liz's vocal talents front and center while not losing the neat little details in her ethereal arrangements. Just as tasteful are Liz's lyrics, filled with somber stories of loss and desires left unfulfilled. To draw another comparison, there are moments on The Mezzanine where Liz Durrett reminds me just as much of Mimi Parker (Low) as she does that other girl I keep mentioning.

All comparisons aside, Liz Durrett has managed to make a lovely and provocative record that I will undoubtedly have on heavy iPod rotation for a good time to come. And while The Mezzanine may come in a little low on the uniqueness scale, it is certainly not because Liz Durrett lacks in talent or integrity.