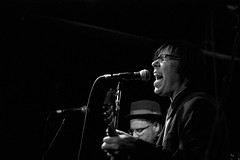 Now, that's not to say I don't love me some young musician dudes, or that I pre-judge and categorize bands or performances based on age, stature, or any of that. But put me at a Wrens show, or something like the Minus 5, and I am in girl-geek heaven. The sheer amount of experience, finely-tuned appetite for perfect gear, and library of musical knowledge that tends to exist in such circumstances — it's almost a guarantee that the show will translate near-flawlessly. And this past Saturday's bill at the Tractor was no exception to that proof, heavy-laden with 40-somethings that ate Who albums for breakfast once upon a time.

ChrisB and I both cheerfully braved the weather for the Sixth Annual Musicares Double-Album benefit show and man, were we stoked for it! With previous years' selections like Blonde on Blonde, Exile on Main Street, and London Calling, we knew that the 2008 choice of Quadrophenia was certainly not going to be a sloucher. From the opening rain-effects bleeding into "I Am the Sea", to the full-blast rock of "5:15", to the closing strains and screams of "Love, Reign O'er Me" — it was nothing short of a wall-to-wall assault of large-guitar deliciousness, comraderie, and delight. For practially the entire night, all of the musicians that weren't performing on a particular song were cheering and clapping from side-stage, or sporadically jumping on in the middle of a tune, or singing along from the front row with vigor. It was total concert bliss, even with a million change-overs and a few minor snow-related delays.

Quadrophenia – (see above and below)

The Punk & The Godfather – The Tripwires

The Dirty Jobs – Down With People

Is It In My Head – The Western SHore

The Rock – Dept. of Energy

With ears still a little ringy, and mouth still a little slack-jaw-edy, here's some of the photos (you can, as always, check the flickr pool for more). I am still in awe from witnessing that much sheer talent in one fell swoop — the Black Panties practially had me eating my camera!