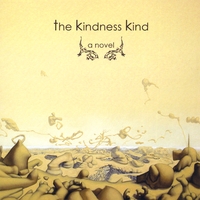 When I reviewed the CD release show for the Kindness Kind’s debut album, A Novel, my review left me with a bad feeling. It wasn't an enjoyable evening for me, though not the band’s fault. I vowed to give extra scrutiny to any planned future visits to the High Dive (especially on a weekend night), but I wanted to go back and revisit the album later to see what (if anything) I missed from my earlier review, after the unpleasantness of the Fremont on a Friday crowd was just a faded memory.

This is what I wrote of the record itself (I know, I know, only the most self-obsessed writers quote themselves at length):

The record itself is a collection of Cure or Smiths-influenced personal pop songs, with a few hints of trip hop thrown in for good measure. Songs like "Street Song" and "Midnight Flights" work so well because they have a tension that continues to build, driven by guitars and complimented by the vocals. The electronic samples and effects accentuate the lyrics and are not a distraction from them. The songs were well-written and put together nicely. Everything noticeable on the album (instrumentation, vocals, songwriting, production, etc…) really does seem to click.

Before I sat down at my computer to reconsider the album (and after not having seriously listened to the album since I wrote the review of the show), I had mostly forgotten what I had written, yet found the notes I took were nearly identical to what was in my initial review. The gothic pop influences of the Smiths and the Cure were still obvious but the more I listened to the record, the more I began to notice that Alessandra Rose’s voice reminded me of Regina Spektor’s. It’s jarring but not grating, neither soft nor overpowering, yet it makes it easy to notice and is far more of a presence on the album then in a live setting.

Also, when I noted that the tension that continuously builds on tracks like “Street Song” and “Midnight Flights,” I noticed it was more of a common trait in more songs on the album, like “Quiet Words are Quiet Words” and “Perfect." It's one trait that makes songs from the Kindness Kind instantly identifiable. When the songs have nowhere else to go after they’ve built up as far as they can, they just stop. It works so well because there's not a cool down where the song fades away; instead they go head first in to the next track. Because of this, the sequencing doesn’t really matter and the record itself plays as good on shuffle as it does as being played from beginning to end.

The one difference I noticed was that my favorite track on the album changed. “Street Song” was the one I most appreciated when I first listened to the album, but now “Perfect" is the one I want to hear now and again (and again). It's the most straight-forward rock song on A Novel, but I missed the xylophone and the nice use of feedback at the end of the song, and how it complements the driving, steady drum beat. Rose’s voice is the strongest I’ve heard it and she sounds like a rock star trying to break free of softer pop/trip hop band and drags the band (especially the electric guitar parts) where she wants to go.

A Novel really does get progressively better after each listen, and was definitely worth the revisit. Each time I listened to it I noticed a different layer of production or some strings that were missing from my memory. This really is a meticulously composed album in every step from songwriting to mastering. I’m sure I’ll be spending even more time in the New Year with this album and discovering other neat little bits again for the first time.