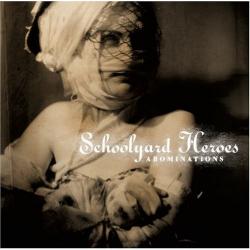 Before I can even begin this review, I have to acknowledge some controversy that’s been brewing around Schoolyard Heroes. A while back, EarCandy, a Seattle-based music blog, printed a letter from an angry – ok, downright irate – un-fan. The author claimed SYH as “avowed Satanists” who “want to corrupt our children and drive them to murder with their fascination with the dark and evil world of Satan.” This resulted in a state of outcry as upset parents formed a petition against the band. The fun swirled as Spin caught wind of the story and ran an interview with bassist Jonah Bergman – and the band has since released a flippant but fun retort – which you can read here.

Whether you believe this madness or think it's all a publicity stunt, the short end of the story is that SYH’s guitarist is inciting parents to do something real: to talk to kids about what they’re listening to, and why. “They are a lot smarter than you think,” Bergman says. And he’s dead right, because not only are “kids” always a heck of a lot smarter than anyone gives them credit for, but they’ve also called the bluff on this one. Schoolyard Heroes' release is one of the best, most hair-raising records out of the Northwest all year.

The production on Abominations is pristine and mature, the songs teeming with sinister chords and spine-tingly good vocals. If you’re inclined to side with the uproar against SYH, you could find heaps of evidence in their lyrics, which feature a strong penchant for the macabre. Lead track “Dude, Where’s My Skin?” gorily opens: “Take off your skin and dance for me/ cut out your tongue and sing for me…” And a chorus of “You’re so dead to me/I wanna see you suffering for me” over a wailing operatic shriek and evil guitar arpeggios is perfectly eerie. “Plastic Surgery Hall of Fame,” for which the video featuring the "cultish kids" was made, has a resounding refrain that makes me quiver: “You’re so pretty and you’re so dead!” screams demon diva Ryann Donnelly and backup vocalist Bergman. Scintillating and scary at once.

Donnelly boldly asserts, “I am the devil and I’ve come to do the devil’s work” in “Cemetery Girls.” And that line “lipstick that tastes like murder” in “Razorblade Kisses”? That should be a new offering from MAC for the Halloween holiday. The creepy track listings continue, “Violence is All the Rage,” and “All the Pretty Corpses” some of the examples. But in this case, both titles disguise pop songs; their subject matter may be bloodthirsty, but these beats and vocal arrangements could just as easily back a Kelly Clarkson track. And the sweetness of “The Last Man on Earth” is nearly saccharine — it almost doesn’t fit the band’s MO, until you listen to the end-of-days words. My favorite is the closer, “Screaming ‘Theater’ in a Crowded Fire.” Overlaying serious rocker riffs are classic guy-girl vocal tradeoffs and devilishly delicious, sexy lyrics that stack up to some pretty disturbing foreplay:

In that same song, the line, “You smeared my blood like a whore’s mascara” is so visceral, it startled me.

I don’t know where all this leads me. These lyrics and wails have gutted my heart and rotted my brain. The juxtaposition of the fright-factor against peaceful pop-sensibilities could well be the devil’s work in disguise. But all shtick or real-evil, SYH sure have some smart marketers behind their release: Abominations is the perfect soundtrack for this ghoulish, All Hallows Eve season. (PS: For Halloween fun, throw this baby into Word to check the wordcount!)