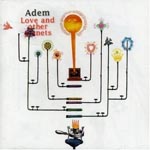 Love and Other Planets

Love and Other Planets begins with the windy whispers of distant cymbals, which slowly approach in the soundscape until they've been joined by guitar to form the stellar track "Warning Call." It seems to burst out of its ethereal tidal glockenspials and teary-eyed vocals at all moments, but it never quite does. The result instills in the listener a sense that a storm is brewing: either outside the apartment or within whatever "good" relationship one may think they are a part of.

Love and Other Planets follows Adem's critically-lauded debut, Homesongs. The new disc finds this London singer-songwriter (also a member of the band Fridge, with Kieran Hebden of Four Tet) tackling the classic endeavor of a concept album. As the title implies, Adem tackles the concept of "space"—be it outer space, physical space, relationship space, or just a metaphor.

And, though strictly adhering to his concept, the moods vary but complement each other well enough to make this truly an album and not just a collection of songs. The opening "Warning Call" deals with the situation of being forewarned that we are destroying ourselves and the only planet we can ever live on; whereas second track "Something's Going to Come" emerges from the zero-gravity reverb of the previous track to offer hope and happiness: "If you still believe / that things are gonna be / like we'd hoped they'd be / then we'll have love / always love."

The rest of the record passes with similar ups and downs in mood and time signature. Some songs pass as one long, shallowly-graded crescendo, teetering on a fulcrum of suspense until they reach their yearning, anti-climatic climax ("X is for Kisses"; "Crashlander"). Others delve into the realm of percussive experiments and strings ("You and the Moon") or offer waves of an elusive happiness in the form of glockenspial arpeggios and major-key choruses ("These Lights are Meaningful"). And then there is the harmonium-based, minimalist title track, which alone can drive goose-bumps from lumberjacks.

As a whole, Love and Other Planets plays start to finish as a competent and enjoyable album from a talented singer-songwriter. Aside from the title track, Adem does little to sound like much more than a less-dynamic (yet much more British and depressed) John Vanderslice. However, Love and Other Planets' success stems from the fact that it is, well, a much mellower, more British, more vocal-reined, John Vanderslice.