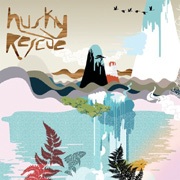 Recent works by a couple of "cinematic" European bands have invaded my ears lately. First it was British four-piece The Guillemots: last month after I discovered their full-length debut "Through The Windowpane" (it's like the soundtrack to a big, glorious, post-Rent indie movie musical that never existed) they were in constant rotation on every music-playing device I own.

But then a Helsinki outfit called Husky Rescue came along. Their latest, "Country Falls," is a seductively understated confection of '60s folk instrumentation, sweeping ambient electronica, and luscious dream-pop that hooked me but good. And it's "cinematic" in its own right, with a far-reaching scope and go-for-nothing inventive fusion that brings to mind the work of David Lynch — one of several filmmakers creator/producer/composer Marko Nyberg cites as a reference.

And you hear it here. Thanks in great part to the sugary whisper of singer Reeta-Leena Korhola's voice, you feel the unending winter nights and continuously sunny summer days of a Nordic homeland in every track, from the sparkling urbanity of "City Lights" to the wispy meander of "Sunset Drive" to the bright sexiness of "Summertime Cowboy."

But the true standout is the surreal, near-masterpiece single "New Light of Tomorrow," with its dreamy male-harmony vocals, sad acoustic guitars, and languorously rhythmic beats. (Check out the awesome video here.. Like the droll work of (also) Finnish filmmaker Aki Kaurismaki, it subtly achieves originality through its deceptively relaxed tone, all the while tugging gently at previously undetected heartstrings.

Five members of the core band (around 20 play on the album) kept all the folky electro-chill of "Country Falls" intact at their live Chop Suey show on 9/6. Korhola's lovely, geeky, braided-pigtails shyness made her otherworldly vocals all the more haunting, and the band provided just the right amount of theatricality — most notably in the adorable form of keyboardist and mix maestro Ville Riippa. (When he wasn't busy peppering the music with electro chirps, flutes, and whistles, he turned to face the audience, in endearingly awkward fashion, seemingly mesmerized by the crowd before him and doing his best to keep up with the obviously less-than-familiar English lyrics. I loved him.. Not that drummer Anssi Sopanen, guitarist Miika Colliander and bassist Nyberg weren't as surprising and delicious as Christmastime hedelmŠkakku themselves.