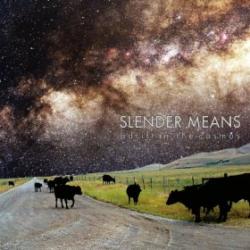 Adrift In The Cosmos

Adrift In The Cosmos is the work of vocalists/guitarists Josh Dawson and Sonny Votolato, keyboardist/backing vocalist Dave E. Martin, Paul Pugliese on bass, and Eric Wennberg on drums. Slender Means have been together for several years, and caught a lot of attention with 2005’s Neon & Ruin, a debut album title that captured both the songs and sound of the band. On their most recent release Adrift In The Cosmos, they co-produce an album with Martin Feveyear that is an aquarium of sound, and also taps into lyrical melancholy as deftly as it paints a huge-ass canvas of pretty, Brit-rock inspired underground pop.

Known for hyper-driven live shows, such as their performance at Noise For The Needy this past summer (explaining why they’re holding down our new downtown tourist trap for weeks) Slender Means use the studio with Blakes’ producer and their own longtime collaborator Feveyear to make records of novel-depth proportion. Although not overplaying or being too compositionally ambitious like other certain juggernaut power pop bands with a throbbing rock vein, the early stream of riffs and bashing from their earlier style now flows into an ocean of hooks, big beats, egalitarian in flash but full up to the challenge of making huge album rock and somehow bringing it on an indie budget.

What makes Adrift In The Cosmos more than a souvenir you’d want to pick up at their lustfully-attended live shows are songs like opener “All In All,” about looking back at life from an after-world and remembering those leftover pills; the irresistibly major notes and minor keys in the alternating verses of “Pitching A Fit” where “no one wants a martyr moping around/you might as well throw yourself into Puget Sound.”  “Bartender” has the most yacht-baroque chorus you’ll ever hear, in an ode of love to drink-servers everywhere. My favorite track, “These Magic Wonderful Times” holds back the snarls and spit to deliver a perfectly sarcastic narrative about our dystopian times set to pumping electric piano and vintage British psyche-guitar riffs. “Pioneers” ponders those who came boldly before us while many of us are too scared shitless these days to have kids.

All eleven songs here could have been pumped up to 10CC levels of sheen; but instead they were simply delineated exquisitely according to the boundaries of imaginary Number #1 cult record standards; and while every song is existentially humorous to the point of being almost dastardly-flippant, none come off morbid or macabre. In fact, if The Shins had been more ambitious melodically, less melancholy sounding compulsively, and actually knew how to flow all those hooks into something less arch but no less compelling, eventually they would have sounded Adrift In The Cosmos.