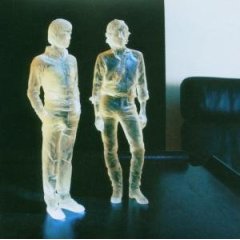 Every time Air is discussed in print or in person it seems that it must be made mention how great Moon Safari was. Fine. Moon Safari is a great record. That being said, I'm not so quick to dismiss everything else they've done as paling in comparison to Moon Safari as is most of the music community. I love 2004's Talkie Walkie; I'd even dare to say I like Talkie Walkie more than Moon Safari.

Unfortunately, when conversing about the best Air records, the French duo's latest release Pocket Symphony will not be mentioned.

When Air was on tour supporting Talkie Walkie, I saw them perform at Coachella; as the sun disappeared behind the horizon I watched Air put on one of the best shows I've ever seen. (They were so good that as soon as I got home I went online and bought tickets for an upcoming show in San Diego where they were again scheduled to play at on outdoor venue, the San Diego State Open Air Auditorium. Days before the show I received an automated call from Ticketmaster letting me know that the show had been moved to a club, and they subsequently denied my request for a refund and stole $150 from me. Bastards.)

When Air hits the US in April to tour behind Pocket Symphony, I will see them in Tacoma. This creates a perfect analogy that can be applied to their latest release: Talkie Walkie is to Coachella as Pocket Symphony is to Tacoma. (I know that they are playing Coachella this year and I've never been to the Pantages Theatre in Tacoma; it might be amazing, but you get my point here.)

There simply isn't a track on the record that will blow you away. It's an album that consists of twelve beautifully crafted songs; the production is amazing, the sound is full, and every note and chord is exactly where it's supposed to be. The songs just aren't all that memorable. The album leads off with "Space Maker," which has a sound reminiscent of "Le Femme D'Argent" from Moon Safari, but the song floats on and never really goes anywhere. Air's label Astralwerks has promoted the song "One Hell of a Party" as it features guest vocals from former Pulp front man Jarvis Cocker, where he sings softly about his after-party regrets. A common theme for all of us no doubt, but it doesn't make for a great song.

I am left to wonder what effect J.B. Dunkel's solo release Darkel had on this record. When Darkel came out earlier this year I thought it sounded like ten really good Air demos. The songs were good, but the harmony wasn't quite there sans Air partner Nicolas Godin. Without Nigel Goodrich producing, the sound wasn't a full and rich as an Air record would be either. Going back and listening to it now, I can't help but think how much better "Pocket Symphony" would have been if some of these Darkel tracks had come to life as an Air project. The more up-tempo tracks such as "TV Destroy" would have been great on Pocket Symphony, which is sorely lacking a couple of paces.

Two tracks stand out on Pocket Symphony: "Somewhere Between Waking and Sleeping" and the albums first single, "Once Upon a Time." On "Somewhere Between Waking and Sleeping," guest vocalist Neal Hannon's voice is ghostly as he croons about the purgatory that exists in-between states of consciousness. "Once Upon a Time" is vintage Air, perfect harmonization over a drum machine and synthesizers. These two songs are commendable, but unfortunately there isn't a song on this record that will capture you in the way that tracks like "All I Need," "How Does it Make You Feel," or "Cherry Blossom Girl" can.

It's not that the album is bad — well, it's not as bad as Tacoma, anyway. Pocket Symphony is just very average.