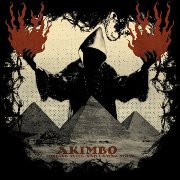 Seattle's own Burke, Jon, and Nat are back, with a freshly-honed, serrated-edge, sludge-melange for San Francisco punk label Alternative Tentacles, and their first full-length since level-raising spiritually decimating Elephantine. Touring like beasts seems to have built up a screeching full head of hot steam for their brand new record. Through a couple of albums, assorted seven inch records, and ten inch collaborations with the likes of Teen Cthulu, the path has surely been set for the atomic detonation that is the superbly-produced Forging Steel And Laying Stone.

Elephantine, which ended on the truly monstrous "I'm A Fucking Ice Giant," helped prepares the fans for the twelve tracks on Forging, where the band seems to truly be transmutating the maelstrom of their malicious yet hilarious live shows into recorded output. You can't see their faces twisting and the crowd spilling out all around them, but the cascading riffs, incessant screams, and super fast fills of "Rickshaw," can be experienced for their cinematic intensity this way. Akimbo can't help a melodramatic opening like the one to "Tina, Bring Me The Axe," but the damn thing swells into a focused mayhem that deserves the ostentatious invitation.

Jon confessed to The Stranger that he had sweet nostalgia for Devo, and somehow his onerous bass playing is just as mechanical and mutated as that group (sort of, in a way). Burke's guitar playing has a nice sleazy 70s edge to it, in the middle of all the threshing, with some surprisingly sensual textures, not all of them atonal. And Nat just sounds like a fucking mastodon all over his kit. There's a fourth guy in the CD booklet, but no one has bothered to tell us who it is. He'll probably die on tour anyways. These bastards!

Who can resist an album that slides from a sinus-splitting skull-crusher like "Precious Moments" into a prostate-pounding nut-masher like "Maximillian Jungle Warrior"? Surely not I.