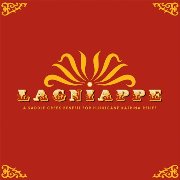 Lagniappe was born from the Omaha-based Saddle Creek label of artists witnessing the absolute horror resulting from the decimation of New Orleans last autumn, and how the terror affected people all over the Greater Gulf. Every penny paid for this thirteen song united effort goes to Red Cross relief funds. Charity is a beautiful thing, and in the case of the ontological and political implications of Katrina, nothing would seem a more appropriate cause for Saddle Creek, a label full of people who are distinctly at odds with a government that enabled the post-Hurricane devastation in New Orleans.

But don't think that I'm giving this such a high rating just because it's such a worthy cause. The album earned a '9' because it rocks. And it's not just the great shit-talking (literally, all the way through) anti-work rant of Cursive's opening. "Ten Percent to the Ten Percent" is a startling, viciously paced song in which Kasher's rage against a job with no meaning is splattered by a sublimely scatological temper tantrum ("Fuck you and your job, I'll shit where I want"). It is a wonderful litany of how daily stress and humiliation are shoving the workforce into venomous contention with the businesses that employ it ("I began stealing things"). It's a call to corporate slack-repentance that rivals label-mate and writing buddy Conor Oberst.

Speaking of whom, Bright Eyes' contribution here, "Napoleon's Hat," is probably the most vicious, existentially-riveting protest song recorded in the past few years. It hits zero to the bone like nothing less than Bob Dylan's "The Lonesome Death of Hattie Carroll" or Phil Ochs' "Here's To The State Of Mississippi." The terror in Oberst's voice is palpable as he floats lines like these above the abyss, "The barons of industry put inspiration on Hitler's tongue — the next century crashed hard with the sound of a starting gun — It's a race for more acquisition and making more things that glow — So I try to look rich and try and make it my whole look because poor people don't exist when times are good." The execution in all ways is striking, from lyrics to singing to the elegantly-restrained music beneath.

If it was just the money for charity and those two songs, this would be an essential purchase. With the glut of tribute, anthology, and charity-sponsoring collections out there (most of them mediocre at best), I still believe in the transcendent quality of a great compilation. Lagniappe does not disappoint much within its existence-frame of 45:52, with moments of bliss like Maria Taylor and Andy LeMaster's soulful and sanguine "Breathe" taking the edge off Kasher and Oberst's "Guernica"-esque mordant expressionism, The Faint's poseur-pounding "Hypnotized" confidently bitch-slapping recent contenders to their throne on the dance floor, Orenda Fink's haunting narrative acoustic take on "No Evolution" ("It was the year of the floor It was the hand of God — I know there's a cycle of death and birth but I won't lose you to this big black earth"), and the criminally-underrated Mayday's foreboding contemplation of theodicy "Footprints" all leading up to yet another deceptively poppy snarling good piss-take from the Good Life, "New Year's Retribution" ("I am just a whore").

In late September last year, artists and friends of Saddle Creek decided to create art out of necessity for others. After a week of brewing up beauty in their, "bedrooms, basements, kitchens, living rooms, and even a couple studios" they have given you a great reason to give some money to the Red Cross.